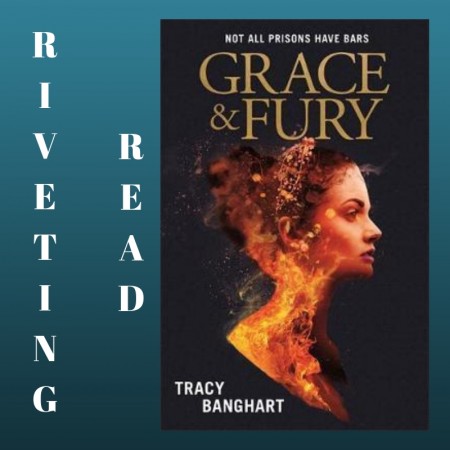 Bold, beautiful and brutal. A stunning beginning to a new series.

Perfect for fans of Keira Cass and Victoria Aveyard

Her current read is ‘Grace and Fury’ by Tracy Banghart

In a world where women have no rights, sisters Serina and Nomi face two very different fates: one in the palace, the other in prison.
Serina has been groomed her whole life to become a Grace - someone to stand by the heir to the throne as a shining, subjugated example of the perfect woman. But when her headstrong and rebellious younger sister, Nomi, catches the heir's eye, it's Serina who takes the fall for the dangerous secret that Nomi has been hiding.
Now trapped in a life she never wanted, Nomi has only one way to save Serina: surrender to her role as a Grace until she can use her position to release her sister. This is easier said than done. A traitor walks the halls of the palace, and deception lurks in every corner. But Serina is running out of time, imprisoned on an island where she must fight to the death to survive and one wrong move could cost her everything.

Tracy Banghart has written a captivating beginning to a new series that is essentially a love letter about the power of women. This is a richly crafted story if defiance and female empowerment that catches your attention from the beginning and never lets go. Told through the point of view of both sisters Banghart excels at showing us opposing viewpoints. Nomi who hates the system and is forced into the very heart of it and Serina who bows to the system and shows strength behind her demure nature is thrown out into the cold to fight for her life. Essentially this is a story of two sisters who will do anything for each other and yet end up in undesirable situations thanks in part to the other sisters and these lengths. The driving force in the book is the sister’s love for each other and their desire to get back to one another. Banghart masterfully weaves together a feminist fantasy worth picking up

Banghart has created characters with unique personalities and are complex. The sisters start off with personalities that seem predictable and cliché but throughout the novel these characters grow adding much needed depth to each character. Nomi is strong willed and rebellious yet still gets caught up in political intrigue. Serina is the polar opposite of Nomi, she is obedient and submissive but somehow ends up literally fighting for her life on a prison island. It was interesting to see each sister transform into someone they had spent their entire lives trying to avoid. Nomi comes off as fierce and rebellious initially but throughout the novel she starts to learn more about persuasion and how to use her wits rather than attack everything head on. Serina on the other hand goes from being a soft Grace to a hardened strong woman who want more out of life. Stunning character development sets the scene for an enticing read that will have you begging for the next book.

A fierce and fantastical beginning that will captivate readers