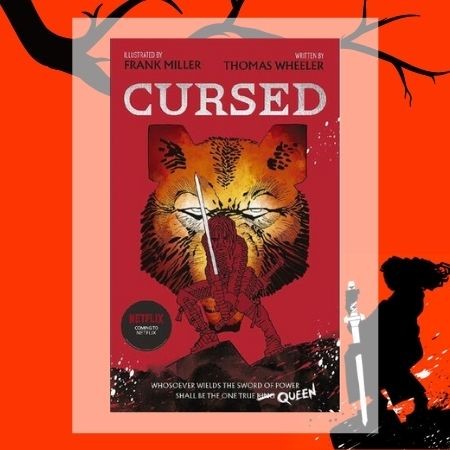 A horrifying yet mesmerising modern retelling of an Arthurian Legend.

Perfect for fans of Sarah J Mass and Toni Adeyeni.

Her current read is Cursed by Thomas Wheeler and illustrated by Frank Miller.

Cursed is a bold retelling of the Arthurian Legend, created by award-winning artist Frank Miller and acclaimed screenwriter Tom Wheeler. However, instead of the typical Arthurian Hero, the tale follows the trials and tribulations of a young Fey girl, Nimue, an outcast to her village people for the dark but powerful magic she tries to repress in order to fit in. When Nimue's village is attacked by the cruel and abhorrent Red Paladins, Nimue is tasked with a great responsibilty to return the Sword of Power to the Magician Merlin, but along the way wonders if the sword belongs to not a King, but instead a Queen.

Wheeler's background is in screenwriting, known for his work Dreamworks Puss in Boots (2011) and Dora and the Lost City of Gold (2019), and through his writing you can definitley tell. His style is descriptive and scenes leave you chilled and in awe, but also creates a stark contrast between the malicious forces behind the fanatic Father Carden and his Red Palidans compared to the beautifully described Fey world and creatures. While there is bludgeoning and gore, there is also a charm and beauty of the magic wielding refugees and landscape that interweave throughout Nimue's adventure. To add to the dark descriptive writing, Graphic Novel enthusiasts will enjoy the illustrations Miller (The Dark Knight Returns, Sin City, 300) dispersed throughout the novel, depicting major scenes that captures both the beauty and the horror of Wheeler's Arthurian world.

We see Wheeler's characters grow throughout their own narratives, which leads to a compelling read and unforeseen yet satisfying twists. Our main heroine Nimue, based on the legendary Arthurian character the Lady of the Lake, starts off as a lone young girl rejected by her people with no sense of belonging, but we see her character grow and unfold with the hard decisions she must make as a leader, and the influence of the Sword of Power. Wheeler also includes other characters that readers will recognise such as the wizard Merlin, a manipulative and useless wizard who has to hide his secret that he has no power at all from the arrogant rulers he serves. Wheeler shows his skills in story-telling by crafting character arcs that reveal who they are in relation to the Arthurian world which leaves you impressed when you find out who they are.

Cursed is a fantastic, fast-paced read for anyone looking for a different take on the legendary Arthurian world that will leave you both shocked and in awe.

You can find this book in Young Adult Fiction under WHE.