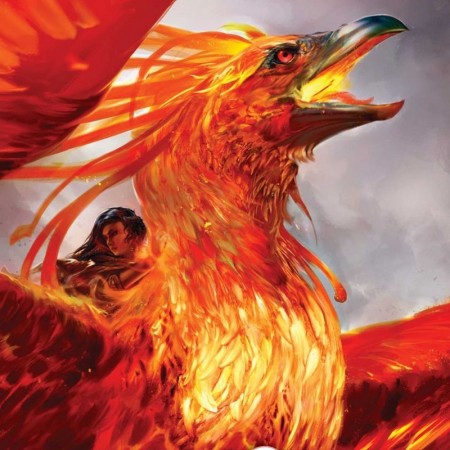 Simmering with suspense and twists and turns aplenty

Perfect for fans of Laini Taylor and Sarah J Maas

Her current read is ‘Crown of Feathers’ by Nicki Pau Preto

In a world ruled by fierce warrior queens, a grand empire was built upon the backs of Phoenix Riders—legendary heroes who soared through the sky on wings of fire—until a war between two sisters ripped it all apart.
Sixteen years later, Veronyka is a war orphan who dreams of becoming a Phoenix Rider from the stories of old. After a shocking betrayal from her controlling sister, Veronyka strikes out alone to find the Riders—even if that means disguising herself as a boy to join their ranks.
Just as Veronyka finally feels like she belongs, her sister turns up and reveals a tangled web of lies between them that will change everything. And meanwhile, the new empire has learned of the Riders’ return and intends to destroy them once and for all.

Nicki Pau Preto has created an immersive and well fleshed out world. This strong fantasy world is filled with lots of different cultures and history which creates a believable backdrop to the story. The novel is filled with descriptive prose which ramps up the suspense throughout. Preto does not shy away from the death and poverty that often follows the end of a war/ regime change which demonstrates the thought she has put into creating a realistic world. The narrative is told through multiple points of view and the three stories flow seamlessly together which allows for the reader to experience different sides of the conflict. This is also an inclusive world in terms of character diversity. There is LGBTQ+ representation, disabilities, mental illness as well as ethnic diversity. Key themes throughout this novel are the importance of empathy, equality, community and knowing oneself. To top it all off there is a mind-blowing reveal the end that changes everything and leaves you questioning everything about those characters.

Preto has created amazing characters who are the focus of this narrative. The narrative follows three main characters, Veronyka, Tristan and Sev. Sev and Tristan are on the opposite side of the conflict to Veronyka and often at times themselves. Sev is bitter, untrusting and live in constant fear due to his life as a slave as he has animal magic however he is conflicted in his feelings towards Kade, a soldier in the army that has enslaved him. Tristan is a hot head, stubborn and fighting his own demons as he is hiding the fact that he is afraid of fire even though he is a Phoenix Rider and feelings of inadequacy due to his relationship with his father, the commander. Veronyka is by far the most complex character Preto has created. Veronyka begins as a broken shell pushed and pulled around by her sister’s every whim. It was extremely satisfying to see her go from a timid naïve girl to a strong, confident women. Once separated from her sister she becomes a real go getter not letting others dissuade her from her dream to the point of disguising herself as a boy to achieve it. Veronyka fights for gender equality questioning why girls are not included or allowed in the Phoenix Riders and making the people in power rethink their decisions. The characters keep you hooked and invested in the narrative and will have you grabbing for the next installment

You can find this book in Young Adult Fiction under PRE