Riveting Read: City of the Lost 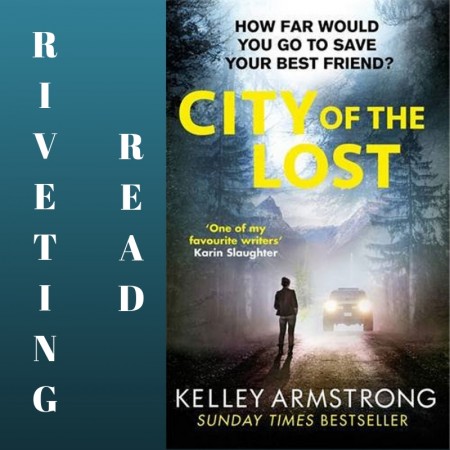 Secrets, seclusion and slayings create a thriller like no other

Perfect for fans of Lee Child and Stieg Larsson

Her current read is ‘City of the Lost’ by Kelley Armstrong

Casey Duncan is a homicide detective with a secret: when she was in college, she killed a man. She was never caught, but he was the grandson of a mobster and she knows that someday this crime will catch up to her. Casey's best friend, Diana, is on the run from a violent, abusive ex-husband. When Diana's husband finds her, and Casey herself is attacked shortly after, Casey knows it's time for the two of them to disappear again.
Diana has heard of a town made for people like her, a town that takes in people on the run who want to shed their old lives. You must apply to live in Rockton and if you're accepted, it means walking away entirely from your old life, and living off the grid in the wilds of Canada. As a murderer, Casey isn't a good candidate, but she has something they want: She's a homicide detective, and Rockton has just had its first real murder. She and Diana are in. However, soon after arriving, Casey realizes that the identity of a murderer isn't the only secret Rockton is hiding—in fact, she starts to wonder if she and Diana might be in even more danger in Rockton than they were in their old lives.

Kelley Armstrong has created dynamic and unique characters that draw you in to this rollercoaster ride of a book. A complex cast of characters populate this isolated and mysterious town. Every one of these characters is guarding his or her secrets, mainly the reason why they escaped to Rockton, meaning no one is really who they seem to be which ramps up the suspense and keeps you on your toes as you never know whose secrets will be revealed next. One of the main characters is Casey and she quickly became a favourite character in this book. She is easy to root for as she is a sympathetic character who is sassy. She is used to being a minority in her job and life which has made her strong willed and stubborn however she is haunted by her past which can often lead her to putting herself in dangerous situations as she believes she is deserving of punishment. This combination of traits makes her a realistic and likeable character. The other main character, Dalton, is a little rough around the edges and like the other residents of Rockton has a secret past. This past is the reason he is slow to trust others but he is also blunt and fair. He is a bit surly and foul mouthed but even though he is all this he is an extremely likable character, he truly cares about the town and its inhabitants. There is romance between the two leads but it doesn’t feel out of place or excessive. Armstrong has created a wonderfully diverse cast of characters that create a page turning plot.

Armstrong seamlessly introduces characters, problems, intrigue and romance throughout the novel. You get sucked immediately into the plot and the strange atmosphere these characters inhabit. Rockton itself is a fascinating idea one rife with possibilities for mystery and subterfuge. The seclusion of the town adds to the tension in the novel as someone in their community is likely the killer. As expected due to the nature of Rockton secrets are a huge theme throughout the novel. But this theme also plays into the whole who can you trust aspect of a detective novel, if the whole town has secrets who can you really trust? This shroud of mystery words in Armstrong’s favour as she keeps you guessing who the killer is right until the end. This is a riveting story filled with heart stopping suspense as well as a sizzling romance.

You can find this book in Adult Fiction under ARM