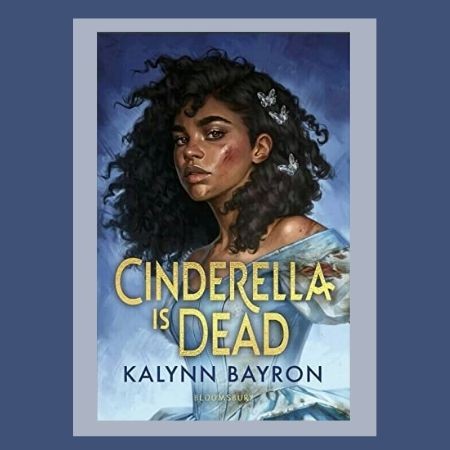 A powerful retelling of a classic fairytale.

Perfect for fans of Melissa Bashardoust and Corey Ann Haydu

Her current read is Cinderella is Dead by Kalynn Bayron

"Do not be silent. Raise your voice. Be a light in the dark".

Cinderella has been dead for two hundred years. And Sophia has been in love with her best friend Erin for the better part of three years. But when Sophia recieves her invitation to the King's Ball on her sixteenth birthday, she is filled with dread as she knows that attending the ball will chain her to a life she does not want to live in. Every girl in the kingdom dreams of being chosen by a man who will take her into her home, but for Sophia it is a fate that she does not wish to have. There are no fairy godmothers and there are no magic potions to save her from her fate. On the night of the ball, Sophia will face her greatest challenge, and she will have to embark on a journey of bravery and strength in order to save her family, friends, and the young girls of Lille who are ruled by a sadistic and evil King.

This tale is for anyone who has ever felt alone in the world. In a world where we are taught how to look and feel, alot of young adults struggle with how to express their feelings and identity. And the fairytales that we are told when we are children can impact on our views on what we desire and what we should believe. Cinderella is Dead was written as a question towards society and the influences of stories that we read as children, and how we carry those values and beliefs into adulthood. In her acknowledgements, Bayron describes how she came to draft Cinderella is Dead from the following three questions: "What effect do fairy tales we are told as children have on us? What happens to our view of the world when the characters in these stories don't look like us or love like us? When do we get to be the heroes of our own stories?".

Cinderella is Dead is LGBTQ+ and ethnically diverse, where the main character Sophia is both gay and black. But what is great about her character arc is that she is strong willed and believes in her rights as a female living in a world controlled by men. Sophia is open about her attraction to girls, but knows that it can get her and her family killed. When "fairy godmother" Amina expresses she does not like Sophia's companion Contance, Sophia rebuttles, "I like her very much", but then feels the "famliar stab of shame", which she hates because she knows that this shame stems from her upbringing and the rules in her village. So there is still a struggle between freedom of expression and that of power from authority. What pushes Sophia to reach her goals to destroy the King is her own feeling of helplessness, living in a kingdom where she is told how to dress, think, act and who to love. As a character, Sophia is definately not written as a girl who is gay, just for the sake of being gay. She stands as a becon of hope for those who may feel as she does - strong enough to show that if you stand up for something you believe in, then you can achieve anything. It is important for the youth of today to have access to novels that represent different cultures and sexuality, so they can see how diverse humanity is, but these characters also need to have a strong voice to show that empathy and compassion for these groups that feel 'voiceless' does exist.

The world building in Cinderella is Dead is fantastic, as it takes the Brother's Grimm tale of Cinderella and twists it to question everything we are told. Characters who we thought were evil, are good, and characters who we thought were good actually have an evil side! I really enjoyed how Bayron also hints towards other Grimm Tales, such as Snow White, which creates a whole universe that Bayron could perhaps explore in future novels. The dead Queen Cinderella herself has become a local legend to the citizens of Lille, and those that are desperate for help sneak off to her abandonded tomb to leave notes of prayer.

I definately recommend this story if you are seeking a fairy tale with a twist.

You can find this book in the Young Adult section under BAY.