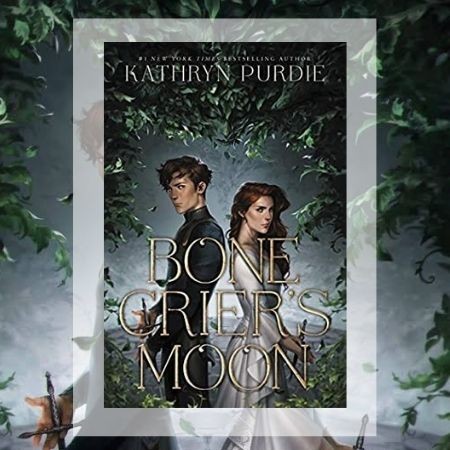 Perfect for fans of Stephanie Garber and Roshani Chokshi.

Her Current Read is Bone Crier's Moon by Kathryn Purdie.

This instalment of Riveting Reads come to you from Assistant Youth Librarian Linda Robertson.

"We will have to make our own sacrifices one day, and it will be easier if we don't grow attatched to those destined to die."

Kathryn Purdie's world building skills are phenominal, and the Bone Crier's Moon is the first book in the Bone Grace duology to introduce and guide us through the fascinating world of the Luerress. The destiny of the Lueress embodies a mythological and folkloric type role, with similarities to that of the Greek character of Charon, the ferry-man of the underworld, who guides the souls of the deceased to Hades, God of the Underworld. In Purdie's world of Bone Criers, the ferrying of the souls is lead by a 'famille' of folkloric women called the Lueress, and is much more dangerous than that of Charon's boat ride - because not all souls want to pass through to the underworld. Once every full moon, the matriarch of the Leuress must lure the souls of the recently deceased and successfully ferry them through the gates to the heavens or the underworld in order to protect the lives of the living. The world of the Luerress relies heavily on the theme of sacrfice. In order to become a Ferrier, a young Luerress must first become a hunter and collect the bones of a wild animal in order to obtain the animal's graces and power (the more extraordinary the animal the better!), and secondly lure their soulmate or amouré into a ritualistic dance and take his life. However, Purdie digs deeper into the theme of sacrifice at a more intimate level, through her main characters and the events they must face.

The Bone Crier's Moon is a three character narrative that gives the reader a multi-character point of view of one event, but also reveals how the fates of the three teenagers intertwine, while the sacrifices they must make adds to their personal growth. Ailesse, the heir to the Bone Criers' throne, is introduced as a naturally strong young woman, but when she is abducted and stripped of her powers by her own amouré, she is placed in a position to work with her captors in order to protect the living from the deadly souls that roam free around the city. Her captor Bastien on the other hand, the boy who witnessed his father's death at the hand of a Luerress and Ailesse's amouré, must choose between his deeply rooted revenge on the Bone Crier's or his conflicted feelings towards Ailesse that develop over time. The character I enjoyed to see grow the most however, was Sabine, Ailesse's best friend and fellow Luerress. Sabine has never had the stomach for the Bone Criers' work, but when Ailesse is abducted and her Matriarch shows no will to save her own daughter, Sabine is forced by her loyalty and friendship to Ailesse to overcome her fears in order to save her.

Every character in Bone Crier's Moon had their own flaws and secrets that created a narrative of suspense and Purdie executed her plost twists briliantly. Her world of the Bone Criers was mythical, magical and full of action. Set in France, the world of the Luerress is full of dark paranormalcy and rituals, and Purdie's writing style creates a world that makes the darkness alluring, but can also transport you into the world, as her descriptive writing releases your senses such as the taste of the salty sea breeze or feel the warmth of the moonlight as you escape from the catacombs below the city.

I definately recommend this read to anyone who is looking for a story to lure them into a world brim full of imagination and beauty.