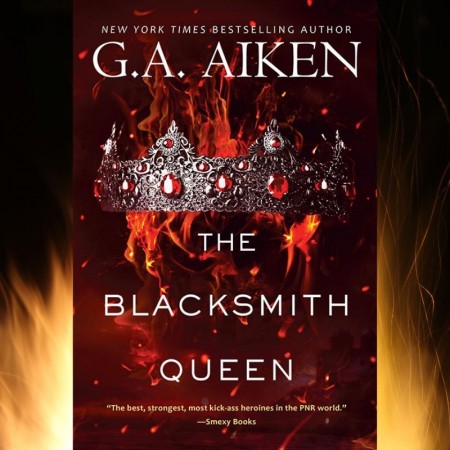 A funny and quirky first installment in a brand new series

Perfect for fans of Deborah Harkness and Sarah J Maas

Her current read is ‘The Blacksmith Queen’ by G. A. Aiken

With the demise of the Old King, there’s a prophesy that a queen will ascend to the throne of the Black Hills. Bad news for the king’s sons, who are prepared to defend their birthright against all comers. But for blacksmith Keeley Smythe, war is great for business. Until it looks like the chosen queen will be Beatrix, her younger sister. Now it’s all Keeley can do to protect her family from the enraged royals.
Luckily, Keeley doesn’t have to fight alone. Because thundering to her aid comes a clan of kilt-wearing mountain warriors called the Amichai. Not the most socially adept group, but soldiers have never bothered Keeley, and rough, gruff Caid, actually seems to respect her. A good thing because the fierce warrior will be by her side for a much longer ride than any prophesy ever envisioned

G.A. Aiken has created a quirky, funny and well fleshed out novel that leaves you begging for the next installment. The heart of this story is a woman who cares deeply for both the family she has and the one she creates and the lengths she will go to protect them. This books is a fast paced read jam packed with plot, everything included had a purpose and often led to hilarious consequences. There is lots of banter, sibling rivalry and action with a slow burning romance that is likely to kick into gear for the rest of the series. Aiken has written supportive men, strong capable women, blood thirsty action sequences all with humour thrown in for good measure. While some may find the first half of the novel slow going the twist in the middle sends the plot racing and you can’t help but feel for the main character, Keeley. Quirky humour, strong heroines, set in a diverse well fleshed our fantasy world – what more could you ask for?

This complex and detailed story introduces a vast array of characters you will come to love or love to hate. All of these characters are hilariously dramatic and nonchalantly violent in equal doses, one minute they will be cracking jokes the next blood and guts are flying everywhere. The main character, Keeley, was my favourite. She is non-judgmental, sees the best in everyone and everything, kind, aware of how skilled she is and yet still has a blind spot for her sisters which can often cause strife. Keeley and her sister Gemma’s relationship was the most realistic as majority of their interactions were just the two of them sniping at each other but they would rain hell down on anyone who opposed the other sister. Aiken gives us a real sense of a true family and what they’ll do to protect one another and ensure they succeed.

A rollercoaster ride of emotions with twists and turns aplenty!

You can find this book in Adult Fiction Rental, AIK