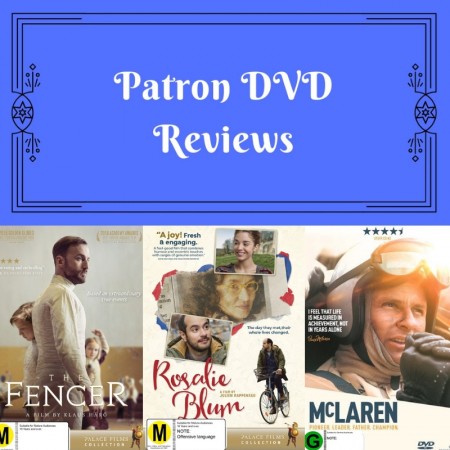 Top Gear has The Sting… Oamaru Library has their own Secret DVD Reviewer, a regular customer who enjoys our wide selection of Movies, TV Series and Documentary titles.

‘McLaren’ Documentary
Amazing story. I am so proud that New Zealander Bruce McLaren did so well on the world’s racing stage as a Formula 1 driver and motor engineer. An excellent watch.

‘The Fencer’
Amazing DVD with well-done subtitles. During WWII, Germany invaded Estonia and forced their young men into their army, including Endel Nelis, a competent fencer. When Stalin invades Estonia in the 1950’s, Endel keeps a low profile as a physical education instructor in a communist school. The bond he grows with his students leads his principal to betray him to the Russian Secret Police. Based on a true story.

‘Saving Mr Banks’
Two great actors, Tom Hanks as Walt Disney and Emma Thompson as Mrs Travers, author of Mary Poppins. Walt tried for 20 years to obtain movie rights to Mary Poppins, but the notoriously uncompromising Mrs Travers won’t budge on her demands. I was amazed at Walt’s patience! The library has another movie called ‘Walt’ about his life.

‘As it is in Heaven’
A really stirring movie that makes you think. Following the life of a conductor who returns to rural Sweden for a much-needed break, and then becomes involved with the local choir and thus with the community. Questions arise around overcoming our fears, stripping away facades, morality and religious values and the love of music which binds real people together.

‘Rosalie Blum’
I enjoyed this French movie. Vincent has a déjà vu experience with Rosalie Blum, but he cannot remember the chance encounter that triggered it. Whimsical, tender and original comedy/drama, entertaining and witty.

‘A Week with Marilyn’
A star-studded, mostly British cast tell the story of how Marilyn Munro came to the U.K. at the height of her fame. She made a period comedy with Sir Lawrence Olivier, but they found little common ground. Marilyn found solace with the young assistant director who helped smooth her ruffled feathers.

‘The History of the Jews’
A fascinating documentary about an interesting religion. The narrator is himself a British Jew, and is articulate and passionate about his Jewish roots. Jewish people’s history is tragic, but their tenacity has enabled them to survive for 3,000 years and to be able to move with the times without compromising their beliefs.