NEW TO THE LIBRARY: YOUNG ADULT 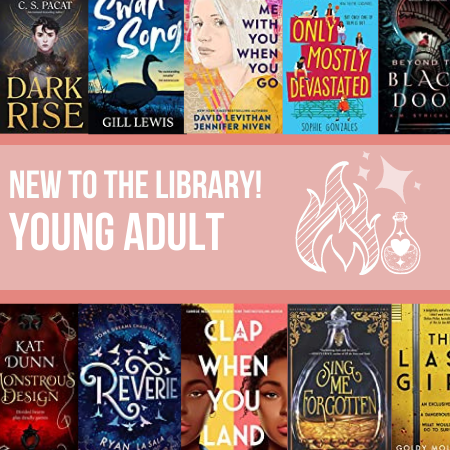 Music, magic, treachery, and heartbreak - here are ten fiery YA novels that are new to our collection!

Beyond the black door / A. M. Strickland

Everyone has a soul. Some are beautiful gardens, others are frightening dungeons. Soulwalkers--like Kamai and her mother--can journey into other people's souls while they sleep. But no matter where Kamai visits, she sees the black door. It follows her into every soul, and her mother has told her to never ever open it. When Kamai touches the door, it is warm and beating, like it has a pulse. When she puts her ear to it, she hears her own name whispered from the other side. And when tragedy strikes, Kamai does the unthinkable: she opens the door.

The Battalion of the Dead return in this adventure, set amid the opulence and squalor of 18th-century London and Paris. The French Revolution is on the brink of collapse and dangerous forces are poised to fill the vacuum. Can the Battalion survive to keep evil at bay?

The ancient world of magic is no more. Its heroes are dead, its halls are ruins, and its great battles between Light and Dark are forgotten. Only the Stewards remember. For centuries they have kept vigil, sworn to protect humanity if the Dark King ever returns. Sixteen-year-old dock boy Will is on the run in London, pursued by the men who killed his mother. When an old servant urges him to seek out the Stewards, Will is ushered into a secret world, where he must train to fight for the Light in the oncoming war.

Take me with you when you go / David Levithan

Ezra Ahern wakes up one day to find his older sister, Bea, gone. No note, no sign, nothing but an email address hidden somewhere only he would find it. Ezra never expected to be left behind with their abusive stepfather and their neglectful mother, how is he supposed to navigate life without Bea?

When new girl Rachel Chavez joins an elite high school in NYC, she's hoping to put a past tragedy behind her. A fresh start where nobody knows what happened to her, or what she did. But then Rachel stumbles across the Mary Shelley club. The purpose of the club is simple: to see who can come up with the best Fear Test, terrifying a chosen victim.

Clap when you land / Elizabeth Acevedo

Camino lives for her father's visits to the Dominican Republic. But this year, on the day when his plane is supposed to land, Camino arrives at the airport to see crowds of crying people. In new York City, Yahaira is called to the principal's office, where her mother is waiting to tell her that her father, her hero, has died in a plane crash. Separated by distance--and Papi's secrets--the two sisters are forced to face a new reality in which their lives are forever altered.

Kane Montgomery was found half-dead in the river. He has no memory of what happened, and why his life seems so different now. The entire world feels off, reality itself seems different. Three almost-strangers claim to be his friends and the only people who can truly tell him what's going on. As unimaginable worlds materialize out of nowhere -- the gym warps into a subterranean temple, a historical home nearby blooms into a Victorian romance rife with scandal and sorcery -- Kane realizes that nothing in his life is an accident.

When Ollie meets Will over the summer break, he thinks he's found his Happily Ever After. But once summer's ended, Will stops texting him back, and Ollie finds himself short of his fairy-tale ending. A family emergency sees Ollie uprooted and enrolled at a new school across the country - Will's school - and Ollie finds that the sweet, affectionate and comfortably queer guy he knew from summer isn't the same one attending Collinswood High.

Isda does not exist. At least not beyond the opulent walls of the opera house. Cast into a well at birth for being one of the magical few who can manipulate memories when people sing, she was saved by Cyril, the opera house's owner. Since that day, he has given her sanctuary from the murderous world outside. All he asks in return is that she use her power to keep ticket sales high--and that she stay out of sight. For if anyone discovers she survived, Isda and Cyril would pay with their lives. But Isda breaks Cyril's cardinal rule when she meets Emeric Rodin, a charming boy who throws her quiet, solitary life out of balance.

Dylan is struggling. Since he started high school, everything has become too much to handle. Now he's been expelled and is forced to move to the tiny village in Wales where his grandad lives. But when Grandad invites Dylan out on his boat to watch the Hooper swans return to their winter feeding ground, things begin to change. Grandad doesn't judge or question; he just lets Dylan be. Out on the water, with no distractions or pressure, Dylan begins to feel like himself again. But when the swans and their home are threatened, and tragedy strikes at home, can Dylan keep going when it feels like everything is slipping out of control again?