If You Like Throne of Glass Why Not Try These 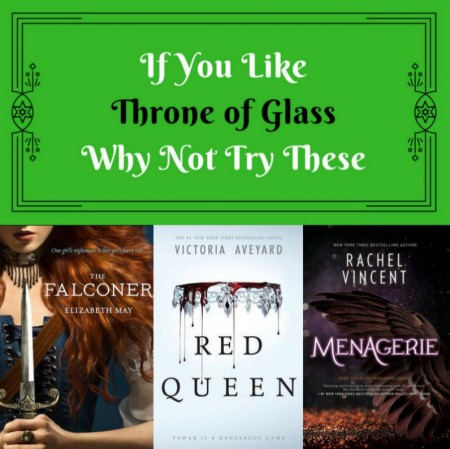 Can’t get enough of Throne of Glass? Struggling to find something similar? Why not try some of the books listed below?

Red Queen by Victoria Aveyard (Young Adult Fiction, AVE)
When her latent supernatural powers manifest in front of a noble court, Mare, a thief in a world divided between commoners and superhumans, is forced to assume the role of lost princess before risking everything to help a growing rebellion
Subjects: resistance, factions, abilities

The Young Elites by Marie Lu (Young Adult Fiction, LU)
Scarred and cast out after surviving the blood plague, Adelina finds a place for herself among the Young Elites who use their magical powers to advocate on behalf of young innocents and who are targeted by the white-robed soldiers of the Inquisition Axis.
Subjects: outcasts, revenge, secret societies

Six of Crows by Leigh Bardugo (Young Adult Fiction, BAR)
Six dangerous outcasts. One impossible heist. Kaz's crew is the only thing that might stand between the world and destruction--if they don't kill each other first
Subjects: heist, revenge, friendship

The Falconer by Elizabeth May (Young Adult Fiction, MAY)
Aileana Kameron a debutante turned faery hunter. With help from Kiran McKay (¬the compelling faery who trained her), ¬the pixie that inhabits her dressing room and old family friends, Aileana faces a battle with some of the most monstrous faeries the world has seen. And it is a battle she may not win.
Subjects: assassins, revenge, faery

Storm Born by Richelle Mead (Adult Fiction Paperback, MEA)
Hired to find a teenager who has been taken to the Otherworld, a sassy shaman soon comes face to face with a startling prophecy--one that uncovers dark secrets about her past.
Subjects: prophesy, strong women, relationships

The Magician’s Guild by Trudi Canavan (Adult Fiction Paperback, CAN)
What the Magicians' Guild has long dreaded has finally come to pass. There is someone outside their ranks who possesses a raw power beyond imagining, an untrained mage who must be found and schooled before she destroys herself and her city with a force she cannot yet control
Subjects: magic school, thieves, factions

An Ember in the Ashes by Sabaa Tahir (Young Adult Fiction, TAH)
Laia is a slave. Elias is a soldier. Neither is free. When Laia and Elias's paths cross at the academy, they find that their destinies are more intertwined than either could have imagined and that their choices will change the future of the empire itself.
Subjects: spies, love, factions

An Unkindness of Magicians by Kat Howard (Adult Fiction Rental, HOW)
Magic controls everything. But the power of magic is fading. No one knows what is happening, except for Sydney, a new, rare magician with incredible power that has been unmatched in decades, and she may be the only person who is able to stop the darkness that is weakening the magic. But Sydney doesn’t want to help the system, she wants to destroy it. Sydney comes from the House of Shadows, which controls the magic with the help of sacrifices from magicians.
Subjects: revenge, contests, murder

The Cruel Prince by Holly Black (Young Adult Fiction, BLA)
Jude, seventeen and mortal, gets tangled in palace intrigues while trying to win a place in the treacherous High Court of Faerie, where she and her sisters have lived for a decade.
Subjects: family, politics, spies

Three Dark Crowns by Kendare Blake (Young Adult Fiction, BLA)
In every generation on the island of Fennbirn, a set of triplets is born: three queens, all equal heirs to the crown and each possessor of a coveted magic. But becoming the Queen Crowned isn't solely a matter of royal birth. Each sister has to fight for it. And it's not just a game of win or lose ...it's life or death. The night the sisters turn sixteen, the battle begins. The last queen standing gets the crown.
Subjects: sisters, contests, Queens

The Tethered Mage by Melissa Caruso (Adult Fiction Rental, CAR)
In the Raverran Empire, magic is scarce and those born with power are strictly controlled, taken as children and conscripted into the Falcon Army. Zaira has lived her life on the streets to avoid this fate, hiding her mage-mark and thieving to survive. Lady Amalia was never meant to be a Falconer. Heiress and scholar, she was born into a treacherous world of political machinations. But fate has bound the heir and the mage. And as war looms on the horizon, a single spark could turn their city into a pyre.
Subjects: conscription, friendship, war

Ink, Iron and Glass by Gwendolyn Clare (Young Adult Fiction, CLA)
A young scriptologist with the ability to write worlds into creation joins forces with a group of other geniuses to save her kidnapped mother.
Subjects: assassins, secret societies, kidnapping

Bound by Blood and Sand by Becky Allen (Young Adult Fiction, ALL)
A slave living in a dying desert world must decide if she wants to help the kingdom's prince save their world
Subject: curses, slavery, class system

Flamecaster by Cinda Williams Chima (Young Adult Fiction, CHI)
Thrown together by chance and united by their hatred of the king, Ash, a gifted healer, and Jenna, a girl abandoned at birth, find themselves on the run from the King's Guard.
Subjects: revenge, relationships, curses

Menagerie by Rachel Vincent (Adult Fiction, VIN)
Under the macabre circus big-top, Delilah discovers a fierce, sharp-clawed creature lurking just beneath her human veneer. Captured and put on exhibition, Delilah is stripped of her worldly possessions, including her own name, as she's forced to "perform" in town after town.
Subjects: prisoners, carnival, creatures