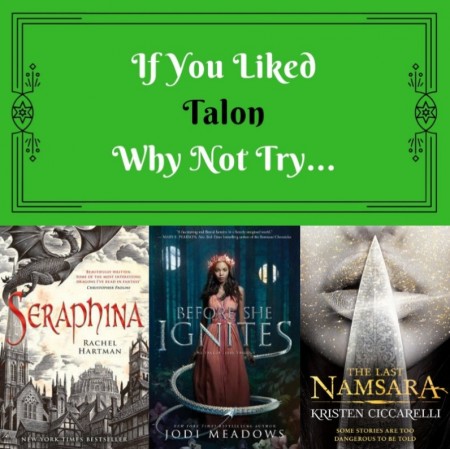 Can’t get enough of Talon by Julie Kagawa? Struggling to find something similar? Why not try some of the books listed below?

Seraphina by Rachel Hartman (Young Adult Fiction, HAR)
Four decades of peace have done little to ease the mistrust between humans and dragons in the kingdom of Goredd. Seraphina has reason to fear both sides. An unusually gifted musician, she joins the court just as a member of the royal family is murdered in suspiciously draconian fashion. Seraphina is drawn into the investigation, partnering with the captain of the Queen's Guard, the dangerously perceptive Prince Lucian.
Contains: identity, secrets, courts and courtiers

Dragon Keeper by Robin Hobb (Adult Fiction, HOB)
Thymara, an unschooled forest girl, and Alise, wife of an unloving and wealthy Trader, are among the disparate group entrusted with escorting the dragons to their new home. On an extraordinary odyssey with no promise of return, many lessons will be learned as dragons and tenders alike experience hardships, betrayals and joys beyond their wildest imaginings.
Contains: odyssey, relationships, memory

Eragon by Christopher Paolini (Young Adult Fiction, PAO)
In his homeland of Alagaesia, a farm boy happens upon a dragon's egg. A discovery that leads him on a predestined journey where he realizes he's the one person who can defend his home against an evil king.
Contains: journeys, resistance, relationships

The Fire Within by Chris d’Lacey (Young Adult Fiction, DLA)
When David moves in with Elizabeth and her eleven-year-old daughter, Lucy, he discovers a collection of clay dragons that come to life. David's own special dragon inspires him to write a story, which reveals the secrets behind a mystery. In order to solve the mystery and save his dragon, David must master the magic of the fire within - not only with his hands but also with his heart
Contains: authors, family, boarding houses

Before She Ignites by Jodi Meadows (Young Adult Fiction, MEA)
Mira has always been a symbol of hope, perfect and beautiful or at least that's how she's forced to appear. When she uncovers a dangerous secret, Mira is betrayed by those closest to her and sentenced to the deadliest prison. Fighting to survive against outer threats and inner demons of mental illness, Mira must find her inner fire and the scorching truth about her own endangered magic before her very world collapses.
Contains: prisoners, secrets, mental illness

Fool’s Gold by Jon Hollins (Adult Fiction, HOL)
It's not easy to live in a world ruled by dragons. The taxes are high and their control is complete. But for one group of bold misfits, it's time to band together and steal back some of that wealth.
No one said they were smart.
Contains: conflict, heists, misfits

Smoke Eaters by Sean Grigsby (Adult Fiction Paperback, GRI)
Firefighter Cole is on the verge of retirement after 30 years on the job, and a decade fighting dragons. But during his final fire call, he discovers he’s immune to dragon smoke. It’s such a rare power that he’s immediately conscripted into the elite dragon-fighting force known as the Smoke Eaters. Soon he discovers a plot to take over the city’s government, he takes matters into his own hands.
Contains: fire fighters, conscription, humour

Flamecaster by Cinda Williams Chima (Young Adult Fiction, CHI)
Thrown together by chance and united by their hatred of the king, Ash, a gifted healer, and Jenna, a girl abandoned at birth, find themselves on the run from the King's Guard.
Contains: revenge, friendship, secrets

Chasing Embers by James Bennett (Adult Fiction, BEN)
There's nothing special about Ben Garston. He's just a guy with an attitude in a beat-up leather jacket, drowning his sorrows in a downtown bar. Or so he'd have you believe.
What Ben Garston can't let you know is that he was once known as Red Ben. That the world of myth and legend isn't just a fantasy, as we've been led to believe. And he certainly can't let you know the secret of what's hiding just beneath his skin. A centuries-old rivalry has just resurfaced, and the delicate balance between his world and ours is about to be shattered.
Contains: myths, secrets, dragons

Dragon Captives by Lisa McMann (Children’s Orange Dot, MCM)
Identical twins Fifer and Thisbe have amazing yet uncontrollable magical abilities. But when they accidentally use their magic in the jungle of Artimé to strike down a beloved creature, Mages are furious.
When Hux, the ice blue dragon, comes bearing the horrible news that his siblings have been enslaved by the evil Revinir, ruler of the dragon land, seeking a chance to right their wrong, Thisbe, Fifer, and their friend Seth sneak away to rescue the dragons from grave peril.
Contains: quests, siblings, magic

The Hobbit by J.R.R. Tolkien (Children’s Orange Dot, TOL)
Bilbo Baggins, the wizard Gandalf, Gollum, and the spectacular world of Middle-earth. Recounts the adventures of a reluctant hero, a powerful and dangerous ring, and the cruel dragon Smaug the Magnificent
Contains: quests, friendship, adventure

The Last Namsara by Kristen Ciccarelli (Young Adult Fiction, CIC)
Asha, daughter of the king, is the fiercest most feared dragon slayer in the land and takes on the role of the next Iskari, a lonely destiny that leaves her feeling more like a weapon than a girl. When she’s offered the chance to gain her freedom in exchange for the life of the most powerful dragon, she finds that there may be more truth to ancient stories than she ever could have expected. With the help of a secret friend Asha must shed the layers of her Iskari bondage and open her heart to love, light, and a truth that has been kept from her.
Contains: adventure, secrets, coming of age

The Waking Fire by Anthony Ryan (Adult Fiction, RYA)
Throughout the vast lands controlled by the Ironship Syndicate, nothing is more prized than the blood of drakes. But not many know the truth: that the lines of drakes are weakening. If they fail, war with the neighboring Corvantine Empire will follow swiftly. The Syndicate's last hope resides in whispers of the existence of another breed of drake, far more powerful than the rest, and the few who have been chosen by fate to seek it.
Contains: quests, battles, secrets

Menagerie by Rachel Vincent (Adult Ficiton, VIN)
When Delilah Marlow visits a famous traveling carnival, she is an ordinary woman in a not-quite-ordinary world. But under the macabre circus big-top, she discovers a fierce, sharp-clawed creature lurking just beneath her human veneer. Captured and put on exhibition, Delilah is stripped of her worldly possessions, including her own name, as she's forced to "perform" in town after town.
Contains: imprisonment, relationships, creature

The Wearle by Chris d’Lacey (Young Adult Fiction, DLA)
The Wearle came to Erth to find out what happened to their previous colony, who never returned. Gabrial, a young blue dragon, is desperate to prove his worth. But the dragons aren't alone in the mountains. Out beyond the scorch line, Ren, a young hom boy, is fascinated by the 'skalers'. Little does he know that his fate and theirs are linked in ways he could never have imagined.
Contains: adventure, friendship, magic