If You Like The Seven Sisters Why Not Try These 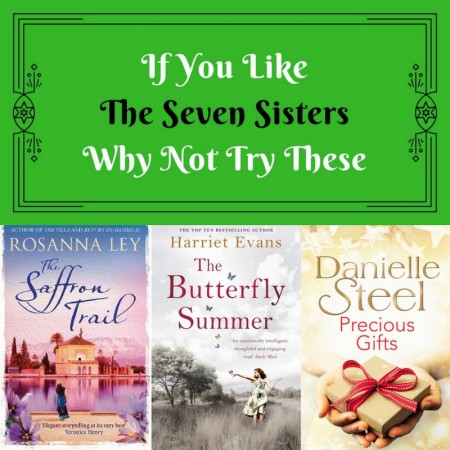 Like the ‘The Seven Sisters’ but can’t seem to find anything similar? Why not try something from the list below!

The Misbegotten by Katherine Webb (Adult Fiction, WEB)
Rachel Crofton escapes the binds of her unhappy employment by marrying a charming self-made businessman. She sees a chance to create the family and home she has so long been without, but her new life soon takes an unexpected turn.
Contains: Missing person, family, secrets

The Winter Children by Lulu Taylor (Adult Fiction, TAY)
After the birth of their children Olivia and Dan make the move to Renniston Hall, an Elizabethan house that belongs to absent friends. Living rent-free in the house, once a boarding school, they can begin to enjoy the family life they've always wanted. But there is a secret at the heart of their family, one that Olivia does not yet know. And the house, too, holds its darkness deep within it.
Contains: secrets, romance, mystery

Secrets of the Lighthouse by Santa Montefiore (Adult Fiction, MON)
Ellen Trawton is running away from it all. She's getting married to a man she doesn't love, her job is depressing and her mother is getting on her nerves. So she escapes to the one place she knows her mother won't follow her, her aunt's house in rural Ireland. Once there, she uncovers a dark family secret and a future she never knew she might have.
Contains: secrets, afterlife, family)

The House on Bellevue Gardens by Rachel Hore (Adult Fiction, HOR)
Three strangers find refuge at 11 Bellevue Gardens, the shabbiest house of a smart white-painted Georgian terrace in North London. Here, its owner Leonie herself once found sanctuary following a short career as a model in the sixties and a destructive marriage. Now, out of gratitude, she opens her house to others in need.
Contains: romance, sanctuary, friendship

The Road Between Us by Nigel Farndale (Adult Fiction, FAR)
Edward, a diplomat held hostage for eleven years in an Afghan cave, returns to London to find his wife is dead, and in her place is an unnerving double - his daughter, now grown up. Numb with grief, he attempts to re-build his life and answer the questions that are troubling him. Was his wife's death an accident? Who paid his ransom? And how was his release linked to Charles, his father?
Contains: fathers and sons, romance, war

Summerset Abbey by T.J. Brown (Large Print, BRO)
1913: In a sprawling manor on the outskirts of London, three young women seek to fulfill their destinies and desires amidst the unspoken rules of society and the distant rumblings of war.
Contains: sisters, social classes, romance

The Saffron Trail by Rosanna Ley (Adult Fiction, LEY)
After the death of her beloved mother, Nell travels from rural Cornwall to the colour and chaos of Marrakech. There she meets Amy trying to unravel the story behind her family's involvement in the Vietnam War. The two women develop a close friendship and discover a surprising connection between their own pasts.
Contains: friendships, families, family history

Bittersweet by Colleen McCullough (Adult Fiction, MCC)
The four Latimer sisters have always been close; always happy. But then they left home to train as nurses, swapping the feather beds of their father's townhouse for the spartan bunks of hospital accommodation. As the Depression casts its shadow across Australia, they are bound by their own secret desires as the world changes around them. Will they find the independence they crave?
Contains: sisters, historical, nurses

You, Me and Other People by Fionnuala Kearney (Adult Fiction, KEA)
For Adam and Beth the first secret wasn’t the last, it was just the beginning. You think you can imagine the worst thing that could happen to your family, but there are some secrets that change everything. And then the question is, how can you piece together a future when your past is being rewritten?
Contains: secrets, family, divorce

Eight Hundred Grapes by Laura Dave (Adult Fiction, DAV)
Growing up on her family’s vineyard, Georgia learned some important secrets. The secret number of grapes it takes to make a bottle of wine: eight hundred. The secret behind ending a fight: hold hands. But just a week before her wedding, thirty-year-old Georgia discovers her beloved fiancé has been keeping a secret so explosive, it will change their lives forever.
Contains: family secrets, limitations, family

The Butterfly Summer by Harriet Evens (Adult Fiction, EVE)
They call it Keepsake, a place full of wonder ... and danger. Locked inside the crumbling elegance of its walls lies the story of the Butterfly Summer, a story you've been waiting all your life to hear. This house is Nina Parr's birthright. It holds the truth about her family - and a chance to put everything right at last.
Contains: inheritance, families, secrets

Precious Gifts by Danielle Steel (Adult Fiction, STE)
As a devoted mother, Veronique has dedicated herself to her three daughters, before and since her divorce. Her world is turned upside down when her former husband dies suddenly, leaving her and their daughters astonishing inheritances: a painting of mysterious provenance, a château in the south of France, the freedom to pursue their dreams, and a shocking revelation from the past.
Contains: legacies, family, romance

All of Us and Everything by Bridget Asher (Adult Fiction, ASH)
When the Rockwell sisters were young their eccentric mother silenced all talk of their absent father. But the consequences of such an upbringing are neither small nor subtle. So when a hurricane hits the family home, the Rockwell’s reunite to assess the damage, only to discover that the storm has unearthed a long-buried box. In a candid moment, Augusta reveals a startling secret that will blow the sisters’ concept of family to smithereens and send them on an adventure to reconnect with a lost past and one another.
Contains: families, reconciliation, sisters

The Amber Keeper by Freda Lightfoot (Adult Fiction, LIG)
A young Abbie Myers returns home after learning of her mother’s death. Estranged from her turbulent family for many years, Abbie is heartbroken to hear that they blame her for the tragedy. Determined to uncover her mother’s past, Abbie approaches her beloved grandmother, Millie, in search of answers. As Abbie struggles to reconcile with her family, and to support herself and her child, she realizes that those long-ago events created aftershocks that threaten to upset the fragile peace she longs to create.
Contains: family secrets, historical, reconciliation