If You Like Romances with a Twist Why Not Try These 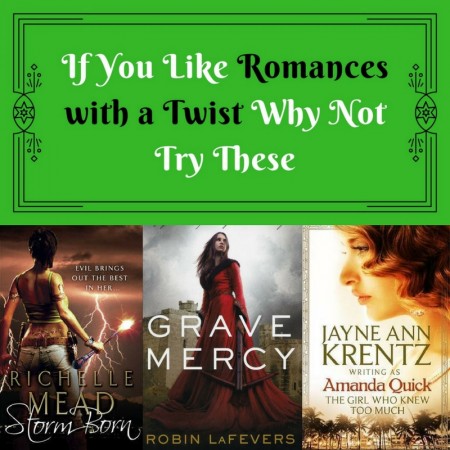 Love romances with a twist but can’t seem to find these books? Why not try some of the books listed below?

The Girl Who Knew Too Much by Amanda Quick (Adult Fiction Rental, QUI)
1930s California, exclusive Burning Cove Hotel caters to their every need. It’s where reporter Irene Glasson finds herself staring down at a beautiful actress at the bottom of a pool.
Contains: murder, secrets, investigation – reporter

The Wrath and the Dawn by Renee Ahdieh (Young Adult Fiction, AHD)
Each night the king takes a new bride only to kill her come morning. When sixteen-year-old Shahrzad's dearest friend falls victim to Khalid, Shahrzad vows vengeance and volunteers to be his next bride.
Contains: revenge, royalty, curses

Grave Mercy by Robin LaFevers (Young Adult Fiction, LAF)
After escaping an arranged marriage Ismae joins the convent of St. Mortain. Here she learns that the god of Death Himself has blessed her. Ismae’s most important assignment takes her straight into the high court of Brittany where she finds herself woefully under prepared not only for the deadly games of intrigue and treason, but for the impossible choices she must make.
Contains: history, politics, service to gods

Me Before You by Jojo Moyes (Adult Fiction, MOY)
Louisa "Lou" Clark moves from one job to the next to help her family make ends meet. Her cheerful attitude is put to the test when she becomes a caregiver for Will Traynor, a wealthy young banker left paralyzed from an accident two years earlier.
Contains: caregivers, young woman, disabilities

Cold Magic by Kate Elliott (Adult Fiction, ELL)
Cat Barahal and her cousin Bee think they understand the society they live in and their place within it. At a select academy they study new airship technologies and the dawning Industrial Revolution, but magical forces still rule. And the cousins are about to discover the full ruthlessness of this rule.
Contains: arranged marriage, family, magic

Avery by Charlotte McConaghy (Young Adult Fiction, MCC)
The people of Kaya die in pairs. Until Ava. Vowing revenge upon the barbarian queen of Pirenti, Ava's plan is interrupted when she is instead captured by the deadly prince of her enemies.
Contains: culture clash, prisoners, survival

The Obsession by Nora Roberts (Adult Fiction, ROB)
No matter how far she runs Naomi can’t escape her father’s crimes not even in the sleepy town of Sunset Cove where the residents are kind and force her to open up
Contains: thriller, crime, reinvention

Daughter of the Forest by Juliet Marillier (Adult Fiction, MAR)
Follows Sorcha's journey as she struggles to break the curse her stepmother Lady Oonagh casted upon her brothers, turning them into swans. When Sorcha is kidnapped by enemies, she is torn between the desire to save her brothers, and a love that comes only once.
Contains: family, magic, historical

The Right Time by Danielle Steel (Adult Fiction Rental, STE)
Alexandra writes under the pen name Alexander on the advice of her father, her true identity only known by her closest friends. Her secret life as the mysterious and brilliantly successful Alexander Green and her own life as a talented young woman, expose her to the envious, the arrogant, and Hollywood players who have no idea who she really is.
Contains: fame – price of, women authors, achieving dreams

The Court of Thorn and Roses by Sarah J Maas (Young Adult Fiction, MAA)
Dragged to a magical kingdom for the murder of a faerie, Feyre discovers that her captor is hiding far more than his piercing green eyes would suggest. As she begins to learn his secrets, her feelings for him change. Feyre must fight to break an ancient curse, or she will lose him forever.
Contains: curses, magic, fairytales

Everything Everything by Nicola Yoon (Young Adult Fiction, YOO)
A teenager who's spent her whole life confined to her home, due to a medical condition, falls for the boy next door.
Contains: Allergies, adventure, friendship

Strange the Dreamer by Laini Taylor (Young Adult Fiction, LAI)
A young librarian with a singular dream to visit the city of Weep, devastated by a war between the Gods and men. What exactly did the Godslayer slay that went by the name of god? And what is the mysterious problem he now seeks help in solving?
Contains: gods, quests, magic

Nemesis by Anna Banks (Young Adult Fiction, BAN)
Princess Sepora of Serubel is the last Forger in all the five kingdoms. The spectorium she creates provides energy for all, but now her father has found a way to weaponize it, and his intentions to incite war force her to flee his grasp.
Contains: plague, warring kingdoms, fantasy