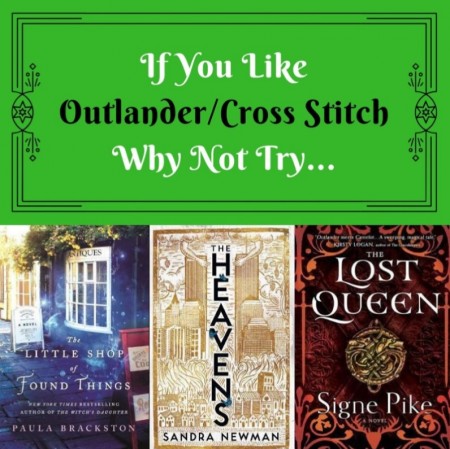 Do you like ‘Outlander/Cross Stitch’ but can’t seem to find anything similar? Why not try something from the list below?

The Dream Daughter by Diane Chamberlain (Adult Fiction Rental)
When Caroline Sears receives the news that her unborn baby girl has a heart defect, she is devastated. It is 1970 and there seems to be little that can be done. But her brother-in-law, a physicist, tells her that perhaps there is. Something that will mean a mind-bending leap of faith on Caroline's part.
Contains: mothers, time travel, family

The Bronze Horseman by Paullina Simons (Adult Fiction, SIM)
Tatiana and Dasha Metanova share a single room in a cramped apartment with their brother and parents. Their world is turned upside down when Hitler's armies attack Russia and begin their unstoppable blitz. Yet there is light in the darkness. Tatiana meets Alexander, a brave young officer in the Red Army. Strong and self-confident, yet guarding a mysterious and troubled past, he is drawn to Tatiana and she to him
Contains: sisters, romance, secrets

Time’s Convert by Deborah Harkness (Adult Fiction, HAR)
Phoebe Taylor adjusts to existence as a vampire while her vampire fiance, Marcus, contemplates his troubled past. Ritual and necessity demand that these two lovers remain apart for three months as Phoebe learns to control her new aptitudes and hungers. The separation inspires Marcus to recall his coming-of-age during the Revolutionary War, his troubled relationship with his abusive birth father, and the vampiric rebirth that links him to a new and powerful family
Contains: time travel, relationships, history

The Little Shop of Found Things by Paula Brackston (Adult Fiction Rental, BRA)
A new series about a young woman whose connection to antiques takes her on a magical adventure to 1605 where she meets architect Samuel Appleby. He may be the person who can help her succeed in saving an innocent girl’s life. He may also be the reason she can’t bring herself to leave
Contains: romance, time travel, ultimatums

The Heavens by Sandra Newman (Adult Fiction Rental, NEW)
Kate has since childhood entered alternate worlds as she sleeps; but the dreams shift and intensify when, in her 20s, she meets and begins dating Ben, a grounded PhD student. Almost nightly Kate becomes Emilia, a pregnant Italian Jew. When Emilia becomes acquainted with melancholy actor Will, the resulting butterfly effect alters countless details of the present. As Kate’s dream relationship with Will becomes increasingly involved visions of a post-apocalyptic world pepper her thoughts.
Contains: dreams, relationships, time travel

A Twist in Time by Julie McElwain (Large Print, MCE)
Former FBI agent Kendra Donovan’s attempts to return to the twenty-first century have failed, leaving her stuck at Aldridge Castle in 1815. And her problems have just begun
Contains: crime, time travel, investigations

The River of No Return by Bee Ridgway (Adult Fiction, RID)
200 years after he was about to die on a Napoleonic battlefield, Lord Nicholas Falcott wakes up in twenty-first-century London. The Guild, a secretive fraternity of time travelers, informs him that there is no return. But Nick yearns for the beautiful Julia Percy, who remains in 1815. As fate and the fraying fabric of time draw Nick and Julia together once again, the lovers must match wits and gamble their hearts against the rules of time itself.
Contains: romance, time travel, secret societies

The Rose Gardens by Susanna Kearsley (Adult Fiction, KEA)
When Eva finally accepts that she is able to slip between centuries and see and talk to the inhabitants from hundreds of years ago, she soon finds herself falling for Daniel Butler, a man who lived - and died - long before she herself was born. Eva begins to question her place in the present, and in laying her sister to rest, comes to realise that she too must decide where she really belongs, choosing between the life she knows and the past she feels so drawn towards.
Contains: time travel, romance, history

Valley of the Moon by Melanie Gideon (Adult Fiction, GID)
A woman who feels lost in her own time stumbles across a California community that has, impossibly, been marooned in the early twentieth century
Contains: time travel, family, romance

The Lost Girls by Jennifer Spence (Adult Fiction Rental, SPE)
At the core of the enigmatic Stella’s story, past and present, is a mystery she is compelled to solve, a beautiful young woman who went missing fifty years ago – and a tragedy much closer to home she must try to prevent.
Contains: time travel, family, missing persons

The Lost Queen by Signe Pike (Adult Fiction, PIK)
Together with her twin brother Lailoken, Languoreth is catapulted into a world of danger and violence. When a war brings the hero Emrys Pendragon, to their door, Languoreth collides with the handsome warrior Maelgwn. Their passionate connection is forged by enchantment, but Languoreth is promised in marriage to Rhydderch, son of the High King who is sympathetic to the followers of Christianity. As Rhydderch's wife, Languoreth must assume her duty to fight for the preservation of the Old Way, her kingdom, and all she holds dear.
Contains: family, Scotland, romance

The Ancient Future Trilogy by Traci Harding (Adult Fiction, HAR)
Late one evening, a car accident leaves Tory stranded near a ring of stones in the English countryside. But across the vortex of time and space, she is being watched. The Merlin knows of the legend Tory is to become, and through the wisdom of the Old Ones, teleports her back to the Dark Age.
Contains: time travel, romance, history

The Summer of Impossible Things by Rowan Coleman (Adult Fiction, COL)
Luna gets the chance to meet her mother as a young women and perhaps save her mother’s life.
Contains: mystery, time travel, family

Prenna James immigrated to New York when she was twelve. Except Prenna didn’t come from a different country. She came from a different time—a future where a mosquito-borne illness has mutated into a pandemic, killing millions and leaving the world in ruins. Prenna does as she’s told, believing she can help prevent the plague that will one day ravage the earth. But everything changes when Prenna falls for Ethan Jarves.
Contains: time travel, romance, pandemics

A Thousand Pieces of You by Claudia Gray (Young Adult Fiction, GRA)
Marguerite must chase her father's killer through multiple dimensions using her father’s invention of the Firebird. Soon she discovers the truth behind her father's death is far more sinister than she expected.
Contains: family, murder, space and time