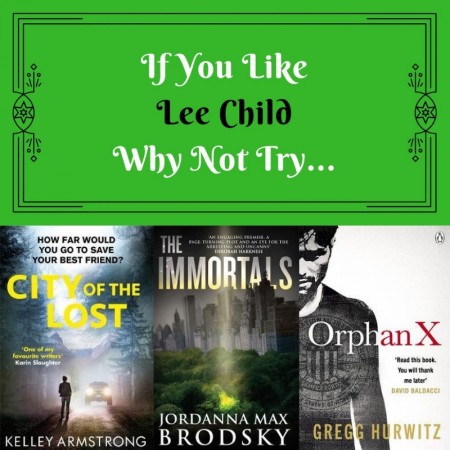 Can’t get enough of Lee Child? Struggling to find something similar? Why not try some of the books listed below?

Orphan X by Gregg Hurwitz (Adult Fiction, HUR)
As a boy, Evan Smoak was taken from an orphanage. Raised and trained in a top-secret programme, then he broke with the programme, using what he'd learned to vanish. Now he helps the desperate and deserving. But someone's on his trail. Someone who knows his past and believes that the boy once known as Orphan X must die
Contains: vigilantes, secrets, assassins

The Wanted by Robert Crais (Adult Fiction, CRA)
It seemed like a simple case before the bodies starting piling up. Investigator Elvis Cole and his partner, Joe Pike, take on the deadliest case of their lives
Contains: private investigators, assassins, crime

The Immortals by Jordanna Max Brodsky (Adult Fiction, BRO)
In the predawn calm, Selene finds the body of a young woman washed ashore, gruesomely mutilated and wreathed in laurel. Her ancient rage returns. And so does the memory of a promise she made long ago. To protect the innocent-and to punish those who stand in her way.
Contains: myths, vigilantes, crime

The 14th Colony by Steve Berry (Adult Fiction, BER)
Shot down over Siberia, ex-Justice Department agent Cotton Malone is forced into a fight for survival against Aleksandr Zorin, a man whose loyalty to the former Soviet Union has festered for decades into an intense hatred of the United States.
Contains: secret societies, national security, politics

Ashley Bell by Dean Koontz (Adult Fiction, KOO)
At twenty-two, Bibi Blair’s doctors tell her that she’s dying. Two days later, she’s impossibly cured. Fierce, funny, dauntless, she becomes obsessed with the idea that she was spared because she is meant to save someone else. Someone named Ashley Bell. This proves to be a dangerous idea
Contains: cults, detectives, near death experiences

Adrenaline by Jeff Abbott (Adult Fiction, ABB)
Sam Capra - brilliant CIA agent, loving husband, expectant father - loses everything that matters to him in a horrifying moment in London. An unknown enemy has set him up as a traitor. But that enemy has targeted the wrong man.
Contains: kidnapping, intelligence officers, frame ups

The Girl with the Dragon Tattoo by Stieg Larsson (Adult Fiction, LAR)
Journalist Mikael Blomkvist is aided in his search for a woman who has been missing for forty years by Lisbeth Salander, a young computer hacker.
Contains: missing persons, reporters, corruption

Ashes to Dust by Yrsa Sigirdardottir (Adult Fiction, SIG)
In 1973, a volcanic eruption buried an entire Icelandic village in lava and ash. Now this macabre tourist attraction proves deadly once again—when the discovery of fresh bodies casts a shadow of suspicion onto Markús Magnússon, a man accused of killing his childhood sweetheart. His attorney Þóra Guðmundsdóttir finds that her client has a most inventive story to tell. But the locals seem oddly reluctant to back him up
Contains: lawyers, murder, detectives

American Assassin by Vince Flynn (Adult Fiction, FLY)
After the death of his girlfriend at the hands of terrorists, Mitch Rapp is drawn into the world of counterterrorism, mentored by tough-as-nails former U.S. Navy S.E.A.L. Stan Hurley.
Contains: terrorism, intelligence officers, vengeance

The Kill Artist by Daniel Silva (Adult Fiction, SIL)
Immersed in the quiet life of an art restorer, former Israeli intelligence operative Gabriel Allon keeps his past well behind him. But now he is being called back into the game and teamed with an agent who hides behind her own mask. Their target: a cunning terrorist on one last killing spree, a Palestinian zealot who played a dark part in Gabriel's past.
Contains: terrorism, politics, assassins

The Bat by Jo Nesbo (Adult Fiction, NES)
Detective Harry Hole is meant to keep out of trouble. A young Norwegian girl taking a gap year in Sydney has been murdered, and Harry has been sent to Australia to assist in any way he can. He's not supposed to get too involved. When the team unearths a string of unsolved murders and disappearances, nothing will stop Harry from finding out the truth.
Contains: murder, police, mystery

Runner by Patrick Lee (Adult Fiction, LEE)
She is scared. Alone. Only eleven years old. And the target of a nationwide manhunt. But why?
Hunted by the people she escaped from, she cannot remember who she is, or why she is so important.
When Sam Dryden, a former elite soldier, instinctively helps hide this terrified young girl, he has no idea what he is unleashing.
Contains: Special Forces, prisoners, mystery

Force of Nature by Jane Harper (Adult Fiction, HAR)
Five women reluctantly pick up their backpacks and start walking along a muddy track.
Only four come out on the other side. Federal Police investigator Aaron Falk has a keen interest in the whereabouts of the missing hiker, Alice Russell. Because Alice knew secrets, about the company she worked for and the people she worked with.
Contains: missing persons, detectives, secrets

City of the Lost by Kelley Armstrong (Adult Fiction, ARM)
Welcome to Rockton: a secret town cut off from the rest of the world. If you need a place to hide, this is the perfect place to start again. There's just one catch. You can't leave. Even if there's a killer on the loose.
Contains: outcasts, detectives, murder

Hangman by Jack Health (Adult Fiction, HEA)
A 14-year-old boy vanishes on his way home from school. His frantic mother receives a disturbing ransom call. It's only hours before the deadline, and the police have no leads.
Enter Timothy Blake, codename Hangman. Blake is a genius, known for solving impossible cases. He's also a sociopath - the FBI's last resort.
Contains: murder, investigations, kidnapping