If You Like The Hunger Games Why Not Try... 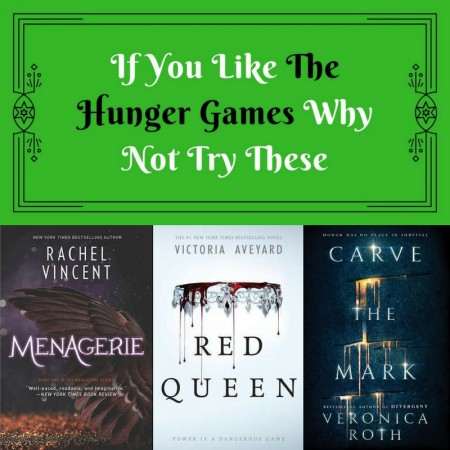 Do you like ‘The Hunger Games’ but can’t seem to find anything similar? Why not try something from the list below

The Maze Runner by James Dashner (Young Adult Fiction, Das)
Thomas is deposited in a community of boys after his memory is erased, soon learning they're all trapped in a maze that will require him to join forces with fellow "runners" for a shot at escape.
Contains: Amnesia, survival, labyrinth

Legend by Marie Lu (Young Adult Fiction, LU)
Day is in a race for his family's survival, while June seeks to avenge her brother’s death. But the two uncover the truth of what has really brought them together, and the sinister lengths their country will go to keep its secrets.
Contains: fugitives, government resistance, war

Red Queen by Victoria Aveyard (Young Adult Fiction, AVE)
Commoner reds are ruled by the silver elite who possess powers. Mare discovers that, despite her red blood, she possesses a deadly power of her own. Fearful of Mare's potential, the Silvers hide her in plain view, declaring her a long-lost Silver princess, now engaged to a Silver prince. Despite knowing that one misstep would mean her death, Mare works silently to help the Red Guard, a militant resistance group, and bring down the Silver regime.
Contains: social classes, government resistance, abilities

The Giver by Lois Lowry (Young Adult Fiction, LOW)
Jonas lives in a seemingly idyllic world of conformity and contentment. When he begins to spend time with The Giver, an old man who is the sole keeper of the community's memories, Jonas discovers the dangerous truths of his community's secret past. Jonas realizes that he must escape from their world to protect himself and those he loves, a challenge no one has ever completed successfully.
Contains: social control, individuality, memory

Red Rising by Pierce Brown (Adult Fiction, BRO)
Darrow and Reds like him are nothing more than slaves to a decadent ruling class. Inspired by a longing for justice, and driven by the memory of lost love, Darrow joins a resistance group in order to infiltrate the ruling class and destroy society from within.
Contains: Government resistance, social classes, dystopia

Matched by Ally Condie (Young Adult Fiction, CON)
In the Society, officials decide. Who you love. Where you work. When you die. Cassia is faced with impossible choice between perfection and passion.
Contains: mate selection, government control, romance

I am Number Four by Pittacus Lore (Young Adult Fiction, LOR)
John Smith seems like an ordinary teenager, but he is an alien on the run from merciless enemies hunting him and the eight others like him. Always changing his identity and moving to different towns with his guardian, Henri, John has no real past and no true home. However, in the small Ohio town where he now lives, he discovers love, powerful new abilities, and a connection to others of his kind.
Contains: extraterrestrial beings, good vs evil, friendship

Cinder by Marissa Meyer (Young Adult Fiction, MEY)
Cinder, a gifted mechanic in New Beijing, is also a cyborg. She's reviled by her stepmother and blamed for her stepsister's sudden illness. But when her life becomes entwined with the handsome Prince Kai's, she finds herself at the centre of a violent struggle between the desires of an evil queen - and a dangerous temptation.
Contains: extraterrestrial beings, pandemics, romance

Angelfall by Susan Ee (Young Adult Fiction, EE)
It's been six weeks since angels of the apocalypse descended to demolish the modern world. Street gangs rule the day while fear and superstition rule the night. When warrior angels fly away with a helpless little girl, her seventeen-year-old sister Penryn will do anything to get her back.
Contains: kidnapping, sisters, end of the world

The Young World by Chris Weitz (Young Adult Fiction, WEI)
After a mysterious Sickness wipes out the rest of the population, the young survivors assemble into tightly run tribes. Jefferson and Donna, the girl he's secretly in love with, have carved out a precarious existence among the chaos. But when a fellow tribe member discovers a clue that may hold the cure for the Sickness, five teens set out on a life-altering road trip.
Contains: tribes, survival, epidemics

The Program by Suzanne Young (Young Adult Fiction, YOU)
In Sloane’s world, true feelings are forbidden, teen suicide is an epidemic, and the only solution is The Program.
Contains: epidemic, brainwashing, romance

Ink and Bone by Rachel Caine (Young Adult Fiction, CAI)
Ruthless and supremely powerful, the Great Library of Alexandria is now a presence in every major city, governing the flow of knowledge to the masses. Alchemy allows the Library to deliver the content of the greatest works of history instantly but the personal ownership of books is expressly forbidden. Jess Brightwell believes in the value of the Library, but the majority of his knowledge comes from illegal books obtained by his family, who are involved in the thriving black market. Jess has been sent to be his family’s spy, but his loyalties are tested in the final months of his training to enter the Library’s service.
Contains: resistance, alternate history, libraries

Menagerie by Rachel Vincent (Adult Fiction, VIN)
When Delilah Marlow visits a famous traveling carnival, she is an ordinary woman in a not-quite-ordinary world. But under the macabre circus big-top, she discovers a fierce, sharp-clawed creature lurking just beneath her human veneer. Captured and put on exhibition, Delilah is stripped of her worldly possessions, including her own name, as she's forced to "perform" in town after town.
Contains: mythical creatures, imprisonment, carnivals

Carve the Mark by Veronica Roth (Young Adult Fiction, ROT)
In a galaxy powered by the current, everyone has a gift. Once Akos and his brother are captured by enemy Shotet soldiers, Akos is desperate to get his brother out alive—no matter what the cost.
Then Akos is thrust into Cyra's world, and the enmity between their countries and families seems insurmountable. Will they help each other to survive, or will they destroy one another?
Contains: abilities, survival, fate