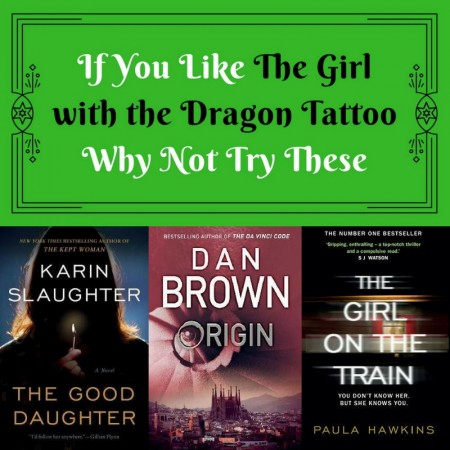 Love ‘The Girl with the Dragon Tattoo’ but can’t seem to find a similar book? Why not try some of the books listed below?

The Shining Girls by Lauren Beukes (Adult Fiction, BEU)
Harper Curtis is a killer who stepped out of the past. Kirby Mazrachi is the girl who was never meant to have a future.
Contains: thriller, crime, time travel

Accused by Lisa Scottoline (Adult Fiction, SCO)
Allegra’s sister Fiona was murdered six years ago, and it seemed like an open-and-shut case: the accused, Lonnie Stall, was seen fleeing the scene; his blood was on Fiona and her blood was on him; most damningly, Lonnie Stall pleaded guilty. But Allegra believes Lonnie is innocent and has been wrongly imprisoned.
Contains: crime, mystery, false imprisonment

The Thirst by Jo Nesbø (Adult Fiction, NES)
Harry is inextricably drawn back into the Oslo police force. A serial murderer has begun targeting Tinder daters—a murderer whose MO reignites Harry's hunt for a nemesis of his past.
Contains: detectives, crime, thriller

The Unlucky Lottery by Håkan Nesser (Adult Fiction, NES)
Four friends celebrate the fact that they have won the lottery. Just hours later, one of them is found in his home, stabbed to death. Then another goes missing as well as the first victims neighbor.
Contains: mystery, murders, investigations

The Good Daughter by Karin Slaughter (Adult Fiction Rental, SLA)
Two girls are forced into the woods at gunpoint. One runs for her life. One is left behind. 28 years later these girls will look for the truth of that night, the night there mother was murdered.
Contains: trauma, crime, mystery

The Girl on the Train by Paula Hawkins (Adult Fiction, HAW)
A divorcee becomes entangled in a missing persons investigation that promises to send shockwaves throughout her life.
Contains: memory, relationships, mystery

Gone Girl by Gillian Flynn (Adult Fiction, FLY)
With his wife's disappearance having become the focus of an intense media circus, a man sees the spotlight turned on him when it's suspected that he may not be innocent.
Contains: suspense, romance, psychology

Exposed by Liza Marklund (Adult Fiction, MAR)
The discovery of a woman's body in a cemetery leads neophyte reporter Annika Bengtzon deep into the investigation of the rape and murder case, which seems to reach into the halls of power in Sweden.
Contains: women reporter, crime, mystery

The Silence of the Sea by Yrsa Sigurdardottir (Adult Fiction, SIG)
A luxury yacht arrives in Reykjavik harbor with nobody on board. What has happened to the crew, and to the family who were on board when it left Lisbon? Thora is hired to investigate, and is soon drawn deeper into the mystery.
Contains: missing people, mystery, women detective

Faceless Killers by Henning Mankell (Adult Fiction, MAN)
A man is tortured to death and his wife beaten and left for dead with a noose around her neck. Inspector Kurt Wallander is put on the case with his team
Contains: crime, detectives, racism

I’m Travelling Alone by Samuel Bjork (Adult Fiction, BJO)
Two detectives must hunt down a vengeful killer who killed a 6 year old girl leaving her hanging from a tree and uncover the secret that ties each of them to the crime
Contains: crime investigation, suspense, police

The Surgeon by Tess Gerritsen (Adult Fiction, GER)
A surgical killer who targets lone women is on the loose in Boston. Homicide detective Thomas Moore and his partner Jane Rizzoli are on the case and find a surprising link.
Contains: strong women, suspense, crime

White Heat by M.J. McGrath (Adult Fiction, MCG)
On Craig Island, north of the Arctic Circle, three travelers are hunting duck. Among them is Inuit hunter and guide, Edie Kiglatuk; a woman born of this harsh, beautiful terrain. The two men are tourists but when one of them is shot dead, the local Council of Elders in is keen to dismiss it as an accident.
Contains: murder investigation, strong women, mystery

Origin by Dan Brown (Adult Fiction Rental, BRO)
Robert Langdon arrives at the Guggenheim Museum in Bilbao to attend the unveiling of a discovery that “will change the face of science forever.” But the meticulously orchestrated evening suddenly erupts into chaos, and Kirsch’s precious discovery teeters on the brink of being lost forever.
Contains: quests, secrets, thriller