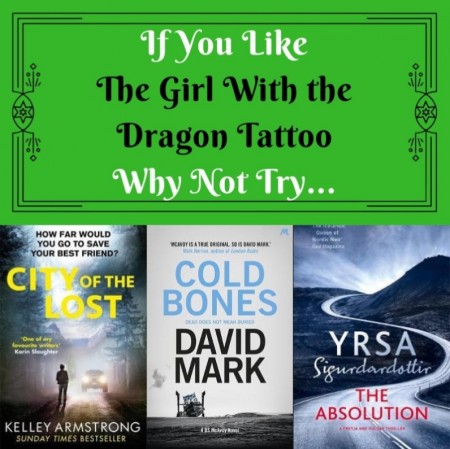 City of the Lost by Kelley Armstrong (Adult Fiction, ARM)
Welcome to Rockton: a secret town cut off from the rest of the world. If you need a place to hide, this is the perfect place to start again. There's just one catch. You can't leave. Even if there's a killer on the loose.
Contains: secrets, detectives, murder

The Snowman by Jo Nesbo (Adult Fiction, NES)
For Detective Harry Hole, the death of a young woman during the first snowfall of winter feels like anything but a routine homicide. His investigation leads him to "The Snowman Killer," an elusive sociopath who continuously taunts Hole with cat-and-mouse games.
Contains: serial killers, investigations, police

Wired by Julie Garwood (Adult Fiction, GAR)
A beautiful computer hacker and a bad-boy FBI agent must collaborate to find a leak within the FBI.
Contains: hackers, crime, romance

Into the Water by Paula Hawkins (Adult Fiction, HAW)
Days before her death, Nel called her sister. Jules didn’t pick up the phone, ignoring her plea for help. Now Nel is dead. They say she jumped. Jules has been dragged back home to care for the teenage girl her sister left behind. But Jules is afraid of her long-buried memories, of the old Mill House, of knowing that Nel would never have jumped.
Contains: detectives, murder, sisters

Dark Place by Gillian Flynn (Adult Fiction, FLY)
A woman confronts traumatic, childhood memories of the murder of her mother and two sisters when she investigates the possibility that her brother is innocent of the crime.
Contains: family, murder, investigations

How the Dead Speak by Val McDermid (Adult Fiction Rental, MCD)
When human remains are discovered in the grounds of an old convent, it quickly becomes clear that someone has been using the site as their personal burial ground. But with the convent abandoned long ago and the remains dating back many years, could this be the work of more than one obsessive killer?
Contains: investigations, murder, police

The Absolution by Yrsa Sigurdardottir (Adult Fiction Rental, SIG)
The police find out about the crime the way everyone does: on Snapchat. The video shows the terrified victim begging for forgiveness. When her body is found, it is marked with a number 2.
Detective Huldar joins the investigation, bringing child psychologist Freyja on board to help question the murdered teenager's friends. Then another teenager goes missing, and more clips are sent. Freyja and Huldar can agree on two things at least: the truth is far from simple. And the killer is not done yet.
Contains: serial killers, social media, investigations

Cold Bones by David Mark (Adult Fiction Rental, MAR)
It's the coldest winter in Hull for years. When McAvoy is told by a concerned stranger that an elderly women hasn't been seen for a few days, he goes to check on her - only to find her body encased in ice. It could be a macabre accident, but when McAvoy finds a series of cryptic messages, he senses murder. Someone watched her die.
Contains: police, secrets, murder

The Book of You by Claire Kendal (Adult Fiction, KEN)
Clarissa is becoming more and more frightened of her colleague, Rafe. He won’t leave her alone, and he refuses to take no for an answer. Being selected for jury service is a relief. The courtroom is a safe haven, a place where Rafe can’t be. But as a violent tale of kidnap and abuse unfolds, Clarissa begins to see parallels between her own situation and that of the young woman on the witness stand.
Contains: stalking, crime, court

The Girl I Used to Be by April Henry (Young Adult Fiction, HEN)
When Olivia’s mother was murdered and her father disappeared, everyone suspected her father had done it. Fast-forward fourteen years. New evidence now proves Olivia’s father was actually murdered on the same fateful day her mother died. That means there’s a killer still at large. Can Olivia uncover the truth before the killer tracks her down?
Contains: murder, identity, orphans

Someone Knows by Lisa Scottoline (Adult Fiction Rental, SCO)
20 years ago four teenagers spent a summer as closest friends. When a new boy looked to join them, they decided to pull a prank, convincing him to play a dangerous initiation game. But none of them could have predicted what came next. Now three of the four reunite for the first time since that horrible summer. But after one of the group apparently commits suicide, their old secrets come roaring back.
Contains: secrets, friendship, death

Exposed by Liza Marklund (Large Print, MAR)
The discovery of a woman's body in a cemetery leads neophyte reporter Annika Bengtzon deep into the investigation of the rape and murder case, which seems to reach into the halls of power in Sweden.
Contains: crime, reporters, mystery

Black Water Lilies by Michel Bussi (Adult Fiction, BUS)
Jerome, a man whose passion for art was matched only by his passion for women, has been found dead in the stream that runs through the gardens of Giverny. In his pocket is a postcard of Monet's Water Lilies with the words: Eleven years old. Happy Birthday. Entangled in the mystery are three women. All three share a secret.
Contains: secrets, murder, investigations

The Good Daughter by Karin Slaughter (Adult Fiction, SLA)
Two girls are forced into the woods at gunpoint. One runs for her life. One is left behind. 28 years later these girls will look for the truth of that night, the night there mother was murdered.
Contains: trauma, crime, mystery