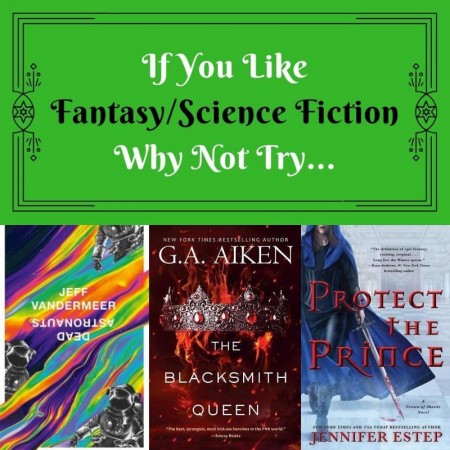 Love Fantasy/Science Fiction? Check out our list of brand new books available in the Rental Fiction section at the Ōamaru Library

The Blacksmith Queen by G.A. Aiken
When a prophesy brings war to the Land of the Black Hills, Keeley Smythe must join forces with a clan of mountain warriors who are really centaurs to protect her sister
Contains: succession, prophecies, relationships

The Gutter Prayer by Gareth Hanrahan
A group of three young thieves are pulled into a centuries old magical war between ancient beings, mages, and humanity
Contains: thieves, magic, creatures

Warrior of the Altaii by Robert Jordan
The watering holes of the Plain are drying up and bad omens abound. Wulfgar, a leader of the Altaii people, must contend with twin queens, warlords, prophets and magic in hopes of protecting his people and securing their future. Elspeth, a visitor from another world, holds the answers, but first Wulfgar must learn to ask the right questions.
Contains: rulers, magic, knowledge

Soul Keeper by David Dalglish
A warrior priest must answer the call and protect his world from monsters, when ancient magic suddenly returns to his land.
Contains: monsters, good vs evil, magic

The Ice House by Tim Clare
Delphine Venner is old, but she remembers everything. In another world, beast-filled and brutal, someone waits for her. Voyaging into this violence and chaos, Delphine must remember who she really is and be ready to fight, before war reawakens.
Contains: assassins, other worlds, good vs evil

The Library of the Unwritten by A.J. Hackwith
Books that aren't finished by their authors reside in the Library of the Unwritten in Hell, and it is up to the Librarian to track down any restless characters who emerge from those unfinished stories. But a simple retrieval goes horrifyingly wrong due to the angel Ramiel attacking them, convinced that they hold the Devil's Bible.
Contains: Librarians, Hell, angels

The Harp of Kings by Juliet Marillier
Eighteen-year-old Liobhan is a powerful singer and an expert whistle player. Her brother has a voice to melt the hardest heart, and a rare talent on the harp. But Liobhan's burning ambition is to join the elite warrior band on Swan Island. Their unusual blend of skills makes them ideal for this particular job, which requires going undercover as traveling minstrels. For Swan Island trains both warriors and spies.
Contains: quests, deception, brothers and sisters

Machines Like Me by Ian McEwan
Alternative 1980s London: Charlie is in love with Miranda, a bright student who lives with a terrible secret. When Charlie comes into money, he buys Adam, one of the first batch of synthetic humans. With Miranda’s assistance, he co-designs Adam’s personality. This near-perfect human is beautiful, strong and clever – a love triangle soon forms.
Contains: alternate history, relationships, artificial intelligence

The Shining Wall by Melissa Ferguson
In a ruined world, where wealthy humans push health and longevity to extremes and surround themselves with a shining metal wall, privilege and security is predicated on the services of cloned Neandertals, and the exploitation of women in the shanty towns and wastelands beyond the fortress city.
Contains: clones, survival, family

Howling Dark by Christopher Ruocchio
Hadrian Marlowe is lost.
Determined to make peace and bring an end to nearly four hundred years of war, Hadrian must venture beyond the security of the Sollan Empire and among the Extrasolarians who dwell between the stars.
If he succeeds, he will usher in a peace unlike any in recorded history. If he fails...the galaxy will burn.
Contains: aliens, wars, space

Dead Astronauts by Jeff VanderMeer
Under the watchful eye of The Company, three characters — Grayson, Morse and Chen — shapeshifters, amorphous, part human, part extensions of the landscape, make their way through forces that would consume them. At stake: the fate of the future, the fate of Earth – all the Earths.
Contains: apocalypse, corporations, war

Blood of an Exile by Brian Naslund
Bershad stands apart from the world, the most legendary dragonslayer in history, both revered and reviled.
Once, he was Lord Silas Bershad, but after a disastrous failure on the battlefield he was stripped of his titles and sentenced to one violent, perilous hunt after another.
The king who sentenced Bershad to his fate has just given him an unprecedented chance at redemption. Kill a foreign emperor and walk free forever.
Contains: dragons, hunters, assassination

The Sword Saint by C.F. Iggulden
Success has drawn a cold gaze. A false king seeks dominion. His soldiers will bring desolation and despair to Darien. With treachery on all sides, the ancient capital looks set to fall.
Yet within the walls of that great city, a small team gathers. When Darien herself is threatened, Tellius will ask them to stand.
A city is worth more than the lives of those within. Darien's streets and courts and homes and taverns are a bonfire on the hill, a beacon of life and light in the world.
Contains: conspiracies, rulers, families

Protect the Prince by Jennifer Estep
Everleigh Blair might be the new gladiator queen of Bellona, but her problems are far from over.
Despite the dangers, Evie goes ahead with a scheduled trip to the neighboring kingdom of Andvari in order to secure a desperately needed alliance. But complicating matters is the stubborn Andvarian king, who wants to punish Evie for the deaths of his countrymen during the Seven Spire massacre.
But dark forces are at work inside the Andvarian palace, and Evie soon realizes that no one is safe.
But Evie’s magic, life, and crown aren’t the only things in danger—so is her heart, thanks to Lucas Sullivan, the Andvarian king’s bastard son. Only one thing is certain—protecting a prince might be even harder than killing a queen
Contains: assassins, revenge, royalty

Good Company by Dale Lucas
Rem and Torval must escort a notorious thief through a dangerous forest to the nearby city from where the thief escaped. But the thief's companions are waiting, and the soldiers Rem and Torval travel with might not be so honorable.
Contains: thieves, murder, outlaws