If You Like A Discovery of Witches Why Not Try 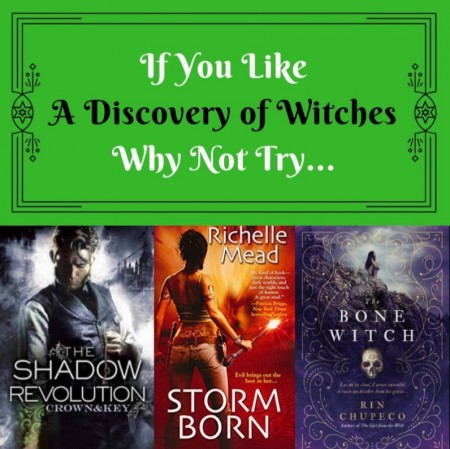 Love witches and things that go bump in the night? Check out our list of books like 'A Discovery of Witches'.

An Unkindness of Magicians by Kat Howard (Adult Fiction, HOW)
Magic controls everything. But the power of magic is fading. No one knows what is happening, except for Sydney, a new, rare magician with incredible power that has been unmatched in decades, and she may be the only person who is able to stop the darkness that is weakening the magic. But Sydney doesn’t want to help the system, she wants to destroy it. Sydney comes from the House of Shadows, which controls the magic with the help of sacrifices from magicians.
Contains: competitions, revenge, murder

A Secret History of Witches by Louisa Morgan (Adult Fiction Rental, MOR)
After Grandmére Ursule gives her life to save her tribe, her magic seems to die with her. Even so, her family keeps the Old Faith, practicing the spells and rites that have been handed from mother to daughter for generations. Until one day, Ursule’s young granddaughter steps into the circle, and magic flows anew.
Contains: family, sacrifice, love

Witches of East End by Melissa De La Cruz (Adult Fiction, DEL)
Free-spirited artist Joanna Beauchamp is the mother of wild-child bartender Freya and shy librarian Ingrid, who are both gifted and cursed with a magic birthright, of which they are unaware. But it isn't until Joanna's estranged sister appears with a warning that could change the family's fate that the matriarch must reveal to her daughters that they are immortal witches with untapped powers, a revelation that turns their small-town life upside down.
Contains: family, good and evil, romance

Dark Witch by Nora Roberts (Large Print)
An American searches for her Irish ancestors to learn more about her powers and break an ancient curse.
Contains: curses, family, romance

Practical Magic by Alice Hoffman (Adult Fiction, HOF)
For more than two hundred years, the Owens women have been blamed for everything that has gone wrong in their town. Gillian and Sally have endured that fate as well. Their elderly aunts almost seemed to encourage the whispers of witchery, with their musty house and their exotic concoctions and their crowd of black cats. But all Gillian and Sally wanted was to escape.

One will do so by marrying, the other by running away. But the bonds they share will bring them back, almost as if by magic.
Contains: family, love, magic

Storm Born by Richelle Mead (Adult Fiction Paperback, MEA)
Hired to find a teenager who has been taken to the Otherworld, a sassy shaman soon comes face to face with a startling prophecy--one that uncovers dark secrets about her past.
Contains: prophecy, romance, magic

Beautiful Creatures by Kami Garcia and Margaret Stohl (Young Adult Fiction, GAR)
In the small town of Gatlin, Ethan Wate sees his static world shaken by the arrival of Lena Duchannes. Immediately, Ethan feels drawn to Lena, even though destruction seems to surround her, and she has supernatural powers that are beyond her control. Worse still, a curse looms for Lena at the approach of her 16th birthday -- a time when the forces of either light or dark will claim her
Contains: curses, friendship, supernatural

Witchstruck by Victoria Lamb (Young Adult Fiction, LAM)
Meg has always known she is different; that she bears a dark and powerful gift. But in 1554 England, in service at Woodstock Palace to the banished Tudor princess Elizabeth, it has never been more dangerous to practice witchcraft. One wrong move could mean her life, and the life of Elizabeth, rightful heir to the English throne. With witchfinder Marcus Dent determined to have Meg's hand in marriage, and Meg's own family conspiring against the English queen, there isn't a single person Meg can trust. Certainly not the enigmatic young Spanish priest Alejandro de Castillo, despite her undeniable feelings. But when all the world turns against her, Meg must open her heart to a dangerous choice.
Contains: history, occult, priests

Spellcaster by Claudia Gray (Young Adult Fiction, GRA)
When Nadia’s family moves to Captive’s Sound, she instantly realizes there’s more to it than meets the eye. Descended from witches, Nadia senses a dark and powerful magic at work in her new town. Mateo has lived in Captive’s Sound his entire life, trying to dodge the local legend that his family is cursed and that curse will cause him to believe he’s seeing the future until it drives him mad. When the strange dreams Mateo has been having of rescuing a beautiful girl—Nadia—from a car accident come true, he knows he’s doomed.

Despite the forces pulling them apart, Nadia and Mateo must work together to break the chains of his family’s terrible curse, and to prevent a disaster that threatens the lives of everyone around them.
Contains: curses, family, love

The Bone Witch by Rin Chupeco (Young Adult Fiction, CHU)
When Tea accidentally resurrects her brother from the dead, she learns she is different from the other witches in her family. Her gift for necromancy means that she's a bone witch, a title that makes her feared and ostracized by her community. But Tea finds solace and guidance with an older, wiser bone witch, who takes Tea and her brother to another land for training.
In her new home, Tea puts all her energy into becoming an asha-one who can wield elemental magic. But dark forces are approaching quickly, and in the face of danger, Tea will have to overcome her obstacles...and make a powerful choice.
Contains: good and evil, magic, necromancy

Menagerie by Rachel Vincent (Adult Fiction, VIN)
Under the macabre circus big-top, Delilah discovers a fierce, sharp-clawed creature lurking just beneath her human veneer. Captured and put on exhibition, Delilah is stripped of her worldly possessions, including her own name, as she's forced to "perform" in town after town.
Contains: carnivals, mythical creatures, prisoners

Written in Red by Anne Bishop (Adult Fiction, BIS)
Meg Corbyn can see the future when her skin is cut, a gift that feels more like a curse. Meg’s Controller keeps her enslaved so he can have full access to her visions. But when she escapes, the only safe place Meg can hide is at the Lakeside Courtyard, a business district operated by the Others.
Contains: prophesies, supernatural, survival

The Shadow Revolution by Clay Griffith (Adult Fiction Paperback, GRI)
Werewolves prowl the shadows of back alleys. But they have infiltrated the inner circles of upper-crust society as well. Only a handful of specially gifted practitioners are equipped to battle the beasts. Among them are the roguish Simon Archer, his layabout mentor, Nick Barker and the self-possessed alchemist Kate Anstruther. After a lycanthrope targets Kate's vulnerable younger sister, the three join forces with fierce Scottish monster-hunter Malcolm MacFarlane but quickly discover they're dealing with a threat far greater than anything they ever imagined.
Contains: history, supernatural, crime solving

City of Bones by Cassandra Clare (Young Adult Fiction, CLA)
In New York City, a seemingly ordinary teenager named Clary Fray learns that she is descended from a line of Shadowhunters, half-angel warriors who protect humanity from evil forces. After her mother disappears, Clary joins forces with a group of Shadowhunters and enters Downworld, an alternate realm filled with demons, vampires and a host of other creatures. Clary and her companions must find and protect an ancient cup that holds the key to her mother's future.
Contains: supernatural, secrets, family

Midnight Crossroad by Charlaine Harris (Adult Fiction, HAR)
Welcome to Midnight, Texas, a town with few full-time inhabitants. There’s a pawnshop (someone lives in the basement and is seen only at night). There’s a diner (people who are just passing through tend not to linger). And there’s new resident Manfred Bernardo, who thinks he’s found the perfect place to work in private (and who has secrets of his own).Stop at the one traffic light in town, and everything looks normal. Stay awhile, and learn the truth
Contains: supernatural, relationships, mystery