If You Like Crazy Rich Asians Why Not Try These 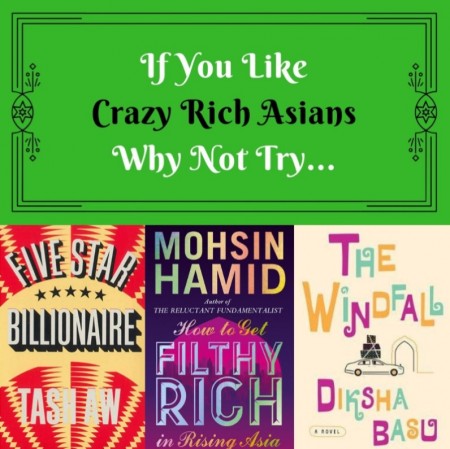 Can’t get enough of Crazy Rich Asians? Struggling to find something similar? Why not try some of the books listed below?

The Windfall by Diksha Basu (Adult Fiction Rental, BAS)
When Mr. Jha comes into an enormous sum of money and moves his wife from their housing complex to the super-rich side of town the move sets off a chain of events that rock their neighbors and their marriage ultimately forcing the Jha family to reckon with what really matters
Subjects: social status, family, wealth

Five Star Billionaire by Tash Aw (Adult Fiction, AW)
Four people from different walks on life are connected together by one billionaire who with his secrets and schemes has a hand in the lives of each of the characters. All bring their dreams and hopes to Shanghai which plays its own fateful role in the lives of its inhabitants.
Subjects: migrants, ambitions, social life

How to Get Filthy Rich in Rising Asia by Mohsin Hamid (Adult Fiction, HAM)
Follows its nameless hero to the sprawling metropolis where he begins to amass an empire built on that most fluid, and increasingly scarce, of goods: water. Yet his heart remains set on the pretty girl whose star rises along with his, their paths crossing and recrossing, a lifelong affair sparked and snuffed and sparked again by the forces that careen their fates along.
Subjects: business success, relationships, self help

The Summer Wives by Beatriz Williams (Adult Fiction Rental, WIL)
1951: Miranda Schuyler arrives on elite, secretive Winthrop Island still reeling from the loss of her father. When her beautiful mother marries Hugh Fisher Miranda is catapulted into a heady new world of pedigrees and cocktails, status and swimming pools.
Miranda finds herself drawn to Joseph and has a catastrophe that will shatter Winthrop’s hard-won tranquility and banish Miranda from the Island for nearly two decades.
1969: Miranda returns at last. On its surface, the Island remains the same. She begins a fierce, inexorable quest for justice to the man she once loved
Subjects: social classes, family, secrets

Chemistry by Weike Wang (Adult Fiction, WAN)
Three years into her graduate studies at a demanding Boston the narrator is tormented by her failed research and reminded of her delays Chinese parents, who have always expected nothing short of excellence from her throughout her life. Eventually, the pressure mounts so high that she must leave everything she thought she knew about her future, and herself, behind.
Subjects: self-discovery, romance, students

Little Fires Everywhere by Celeste Ng (Adult Fiction, NG)
In Shaker everything is planned and no one embodies this spirit more than Elena Richardson, whose guiding principle is playing by the rules. Enter Mia Warren, a single mother who rents a house from the Richardsons. But Mia carries with her a mysterious past and a disregard for the status quo that threatens to upend this carefully ordered community.
Subjects: suburban life, family, secrets

The Golden House by Salman Rushdie (Adult Fiction, RUS)
When powerful real-estate tycoon Nero Golden immigrates to the States under mysterious circumstances, he and his three adult children assume new identities. Arriving shortly after the inauguration of Barack Obama, he and his sons, each extraordinary in his own right, quickly establish themselves at the apex of New York society.
Subjects: secrets, family, politics

Luckiest Girl Alive by Jessica Knoll (Adult Fiction, KNO)
As a teenager Ani FaNelli endured a shocking, public humiliation that left her desperate to reinvent herself. Now, with a glamorous job and handsome blue blood fiancé, she’s this close to living the perfect life she’s worked so hard to achieve. But there’s something buried in her past that still haunts her and threatens to bubble to the surface and destroy everything.
Subjects: secrets, life changing events, young women

Eligible by Curtis Sittenfeld (Adult Fiction, SIT)
A modern take on ‘Pride and Prejudice’ where Liz is a magazine writer in her thirties
Subjects: relationships, social classes, romance

Demelza by Winston Graham (Adult Fiction, GRA)
Demelza now happily finds herself Ross Poldark’s wife. But the events of these turbulent years test their marriage and their love. As Ross launches into a bitter struggle for the right of the mining communities, Demelza’s efforts to adapt to the ways of the gentry (and her husband) place her in increasingly odd and embarrassing situations.
Subjects: marriage, family, social classes

Pride and Prejudice by Jane Austen (Adult Fiction, AUS)
Sparks fly when spirited Elizabeth Bennet meets single, rich, and proud Mr. Darcy. But Mr. Darcy reluctantly finds himself falling in love with a woman beneath his class. Can each overcome their own pride and prejudice?
Subjects: social classes, marriage, sisters

Children of Liberty by Paullina Simons (Adult Ficiton, SIM)
Gina comes to Boston’s Freedom Docks to find a new and better life, and meets Harry Barrington, who is searching for his. The fates of the Barringtons and Attavianos become entwined, on a collision course between the old and new, between what is expected and what is desired, what is chosen and what is bestowed, what is given and what is taken away.
Subjects: social classes, immigrants, relationships

The Expatriates by Janice Lee (Adult Fiction, LEE)
Mercy, a young Korean American and recent Columbia graduate, is adrift, undone by a terrible incident. Hilary, a wealthy housewife, is haunted by her struggle to have a child, something she believes could save her marriage. Meanwhile, Margaret, once a happily married mother of three, questions her maternal identity in the wake of a shattering loss. As each woman struggles with her own demons, their lives collide in ways that have irreversible consequences for them all.
Subjects: motherhood, life changing events, relationships

Based on a True Story by Elizabeth Renzetti (Adult Fiction, RON)
Augusta Price (not her real name) is famous in England for playing a slatternly barmaid on a nighttime soap opera and for falling down drunk in public. Now, she has no job and no relationship with her long-lost son but she has had an improbable hit with her memoir (which is based on a true story, but only very loosely).
But when Frances, an insecure and not very successful American tabloid journalist, tells Augusta that a man she once loved has written a book, Augusta becomes terrified that her life story will be revealed as the web of lies it really is. She sets out on a trans-Atlantic journey from London to California to seek revenge on her former lover — a journey that will require the reluctant help of Frances.
Subjects: actress, satire, secrets