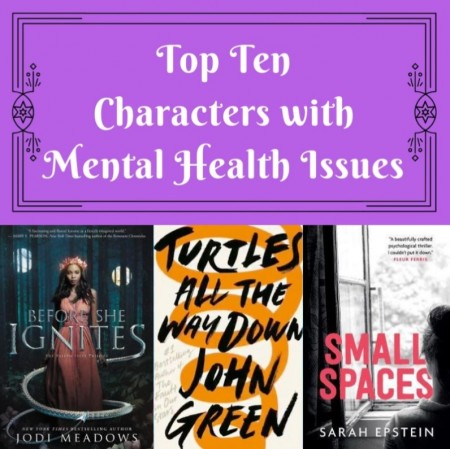 Check out our list of books who do mental illness/health right! Explore these books that touch on mental health realistically and compassionately.

Mira – Before She Ignites by Jodi Meadows (Anxiety/Panic Attacks)
Mira has always been a symbol of hope for the Fallen Isles, perfect and beautiful or at least that's how she's forced to appear. When she uncovers a dangerous secret, Mira is betrayed by those closest to her and sentenced to the deadliest prison in the Fallen Isles. Except Mira is through being a pawn. Fighting to survive against outer threats and inner demons of mental illness, Mira must find her inner fire and the scorching truth about her own endangered magic before her very world collapses.
Young Adult Fiction, MEA

Finn – All The Bright Places by Jennifer Niven (Bipolar Disorder)
When Finch and Violet meet on the ledge of the bell tower at school, it’s unclear who saves whom. And when they pair up on a project to discover the “natural wonders” of their state, both Finch and Violet make more important discoveries: It’s only with Violet that Finch can be himself—a weird, funny, live-out-loud guy who’s not such a freak after all. And it’s only with Finch that Violet can forget to count away the days and start living them. But as Violet’s world grows, Finch’s begins to shrink.
Young Adult Fiction, NIV

Aza – Turtles All The Way Down by John Green (Anxiety/Obsessive Compulsive Disorder)
Sixteen-year-old Aza never intended to pursue the mystery of fugitive billionaire Russell Pickett, but there’s a hundred-thousand-dollar reward at stake and her Best and Most Fearless Friend, Daisy, is eager to investigate. So together, they navigate the short distance and broad divides that separate them from Russell Pickett’s son, Davis. Aza is trying. She is trying to be a good daughter, a good friend, a good student, and maybe even a good detective, while also living within the ever-tightening spiral of her own thoughts
Young Adult Fiction, GRE

Frankie – A Line Made By Walking by Sara Baume (Depression/Anxiety)
Struggling to cope with urban life-and life in general-Frankie, a twenty-something artist, retreats to her family's rural house on "turbine hill," vacant since her grandmother's death three years earlier. It is in this space, surrounded by countryside and wild creatures, that she can finally grapple with the chain of events that led her here-her shaky mental health, her difficult time in art school-and maybe, just maybe, regain her footing in art and life. As Frankie picks up photography once more, closely examining the natural world around her, she reconsiders seminal works of art and their relevance.
Adult Fiction, BAU

Matthew – The Shock of the Fall by Nathan Filer (Schizophrenia)
While on vacation with their parents, Matthew Homes and his older brother snuck out in the middle of the night. Only Matthew came home safely. Ten years later, Matthew tells us, he has found a way to bring his brother back.
Adult Fiction, FIL

Natasha – Small Spaces by Sarah Epstein (Anxiety/Post Traumatic Stress Disorder)
Tash Carmody has been traumatised since childhood, when she witnessed her gruesome imaginary friend Sparrow lure young Mallory Fisher away from a carnival. At the time nobody believed Tash, and she has since come to accept that Sparrow wasn’t real. Now fifteen and mute, Mallory’s never spoken about the week she went missing.
As disturbing memories resurface, Tash starts to see Sparrow again. And she realises Mallory is the key to unlocking the truth about a dark secret connecting them. Does Sparrow exist after all? Or is Tash more dangerous to others than she thinks?
Young Adult Fiction, EPS

Craig – It’s Kind of a Funny Story by Ned Vizzini (Depression/Anxiety)
Ambitious New York City teenager Craig Gilner is determined to succeed at life - which means getting into the right high school to get into the right job. But once Craig aces his way into Manhattan's Executive Pre-Professional High School, the pressure becomes unbearable. He stops eating and sleeping until, one night, he nearly kills himself.
Craig's suicidal episode gets him checked into a mental hospital, where his new neighbors include a transsexual sex addict, a girl who has scarred her own face with scissors, and the self-elected President Armelio. There, Craig is finally able to confront the sources of his anxiety
Young Adult Fiction, VIZ

Matthew – The Goldfish Boy by Lisa Thompson (Obsessive Compulsive Disorder)
Matthew Corbin suffers from severe obsessive-compulsive disorder. He hasn't been to school in weeks. His hands are cracked and bleeding from cleaning. He refuses to leave his bedroom. To pass the time, he observes his neighbors from his bedroom window, making mundane notes about their habits as they bustle about the cul-de-sac.
When a toddler staying next door goes missing, it becomes apparent that Matthew was the last person to see him alive. Suddenly, Matthew finds himself at the center of a high-stakes mystery, and every one of his neighbors is a suspect. Matthew is the key to figuring out what happened and potentially saving a child's life... but is he able to do so if it means exposing his own secrets, and stepping out from the safety of his home?
Children’s Orange Dot, THO

Mike – The Rest of Us Just Live Here by Patrick Ness (Anxiety/Obsessive Compulsive Disorder)
What if you aren’t the Chosen One?
The one who’s supposed to fight the zombies, or the soul-eating ghosts, or whatever the heck this new thing is, with the blue lights and the death?
What if you’re like Mikey? Who just wants to graduate and go to prom and maybe finally work up the courage to ask Henna out before someone goes and blows up the high school. Again.
Because sometimes there are problems bigger than this week’s end of the world, and sometimes you just have to find the extraordinary in your ordinary life.
Even if your best friend is worshipped by mountain lions.
Young Adult Fiction, NES

Caleb – Because Everything is Right But Everything is Wrong by Erin Donohue (Depression/Anxiety)
Can you be lost and not know it?
Can other people stop you from being lost?
Seventeen-year-old Caleb’s world is disintegrating, his walls are closing in, his sky is threatening to fall. He’s barely holding on. To deadlines. To friends. To family. To mum. To Pat.
But he has Casey.
Maybe she can save him
Young Adult Fiction, DON