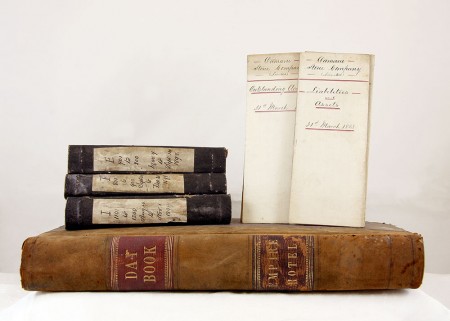 The Perry family have had a long and remarkable association with North Otago. Benjamin Perry was a quarry owner and the proprietor of the Empire Hotel from 1885 until prohibition began in Oamaru in 1905.

In 1879 Mr Perry had the foresight to purchase One Tree Farm at Totara. The famous totara tree after which Totara takes its name was on this site. The farm also proved to be a limestone quarry site of outstanding quality. In the early 1880s Mr Perry formed the Oamaru Totara Tree Stone Company. Demand for Oamaru stone was very high at this time. The easy movement of Oamaru Stone was made possible by developments in shipping and rail in the last decade.

In the early 1970s Keith Perry was demolishing the old bait stable at the rear of the Empire hotel. To his surprise he discovered a cache of records from the Oamaru Totara Tree Stone Company, the Empire Hotel, and George Sumpter and Son Auctioneers (which also used to operate from the premises). The Empire Hotel owner Thomas Perry told Keith to take everything to the dump. Fortunately for the community Keith recognized the value of his discovery and saved these archives from destruction.

The Oamaru Totara Tree Stone Company collection is the most complete record of an iconic local industry and can be used to link Oamaru stone with public and private buildings across the country and globally.

The Perry Family has generously gifted these archives to Waitaki District Archive to be preserved and made accessible to our community and researchers into the future.