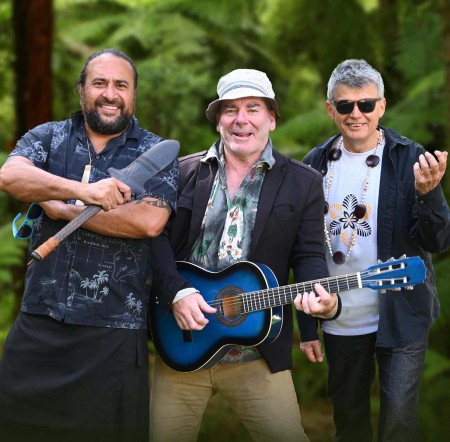 AN ARTS ON TOUR SHOW.

Two poets and a musician combine to present a comic and lyric portrait of Aotearoa New Zealand and its place in the South Pacific today. Their Mad Doggerel poetry cabaret is full of cascading words, wild musicality and lightning humour.

This entertaining show will bring three nationally-eminent artists to halls and venues throughout Aotearoa New Zealand, including a National Poetry Day performance at the National Library in Wellington on Friday 26 August.

David Eggleton, the current Poet Laureate of Aotearoa 2019 – 2022, has been described by reviewers as a a jazz-bop-beatnik poet ‘whose poems never cease to amaze and astound in their creativity … in performance he is no longer just a poet but a ranter, a raver, a conjuror … his poetry spirals into today’s world from a Polynesian heritage’.

David Eggleton, an acclaimed writer, has received just about every literary award for poetry it is possible to receive in New Zealand, from the Prime Minister’s Award for Excellence in Poetry in 2016 to PEN NZ Best First Book of Poems in 1987. Overseas, amongst other events, he has taken part in the Poetry Olympics and the Ranters’ Cup Final, winning Street Entertainer of the Year for Poetry at the London Convent Garden Festival.

Daren Kamali was a co-founder of the South Auckland Poets’ Collective in 2008, an organisation aimed at encouraging young Pacific poets to tell their stories. An accomplished performance poet, as well as a musician, Daren Kamali has travelled the world presenting poems based on Polynesian and Pasifika legends and his own life story. Daren has a Master of Creative Writing with First Class Honours from the University of Auckland (2017). He has released two albums of his poetry set to music using a mix of traditional and rock music instruments.

Richard Wallis is a Dunedin-based classical guitarist. As a soundscape musician he has worked extensively with David Eggleton in producing music and video recordings.

You can purchase online or directly from the Opera House Ticket Office between 10am-2pm Mon-Fri.

The box office and the Opera House Cafe & Bar is open 1 hour prior to the show commencing and during interval.