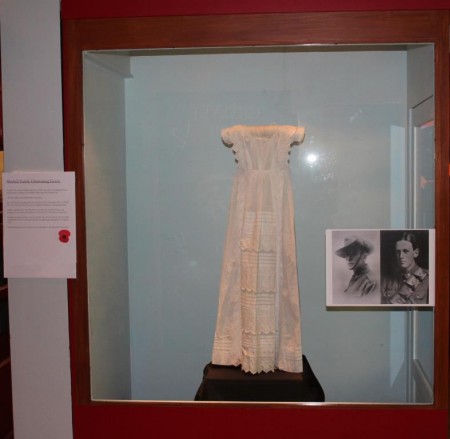 A christening gown worn by three men who served in the First World War is the feature of a new textile display at the North Otago Museum.

The gown was given to the museum by the estate of K.D. Mitchell, the sister of the three soldiers.

Robert Spencer (Roy) had served in the Boer War. He enlisted with the Australian Forces in World War One. He was shot in the arm at Gallipoli, resulting in his arm being amputated.

William Lyle enlisted in the Australian Forces in 1916. He served in France and Belgium. He was shot in the spine on 4 October 1917. He died two days later.

Douglas Orr lied about his age so he could enlist. He served in France. He was badly wounded in 1916 but recovered. He was wounded again and died on 17 August 1917.