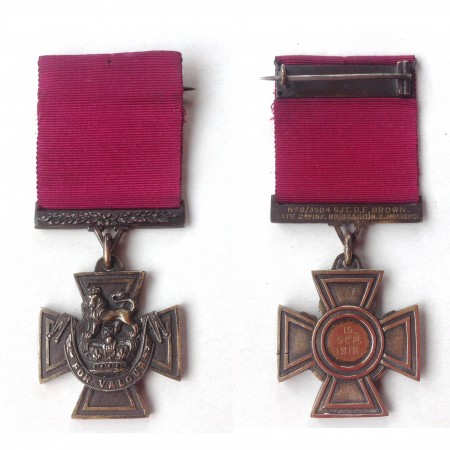 Jane Macknight, Director of the North Otago Museum is delighted to announce a special event at the museum for ANZAC weekend.

The Director of North Otago Museum, Jane Macknight says: “Brown is one of only 23 New Zealanders awarded this medal. The Victoria Cross (VC) is the highest military decoration awarded for ‘valour in the face of the enemy’ to members of the armed forces of Commonwealth countries”

Sergeant Donald Brown, 2nd Battalion, Otago Infantry Regiment 1NZEF was awarded the medal for his actions during the opening day of the Somme campaign on 15 September 1916 for charging and capturing key enemy machine-gun positions.
In Oamaru Brown is honoured with an oak tree planted at the junction of Severn Street and Awamoa Road which forms the centre of the radiating Memorial Oak Scheme.

Jane Macknight says: The Brown VC is still held by members of the Brown family and it’s an incredible honour for Oamaru to be able to have it on display over the ANZAC weekend. The Brown family are holding their reunion in Oamaru over the same weekend and when the offered it to us for public display we jumped at the opportunity”.

The medal will be on display in the Museum temporary gallery, together with other Brown family military medals and artefacts and related collection items from the North Otago Museum and Archive collections. All welcome