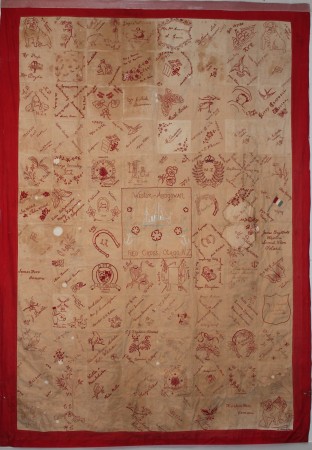 I blogged about the Weston-Ardgowan Red Cross quilt when it was on display in 2015 as part of our World War One exhibition. We have decided to display this quilt again, this time for ANZAC day and to acknowledge that the quilt is now 100 years old.

Quilts like this one were made by local Red Cross branches for two reasons. The first reason was fundraising. It is likely that each square was ‘sold’ to a person, family or other group. To pay for the square they would have made a donation to the Red Cross. The quilt on display has 92 squares (though not every square has a name). It might have cost the equivalent of $5 today. I cannot find a record of how much money this particular quilt raised but an Oamaru Mail article from 27 June 1917 shows that the Pukeuri branch raised 3 pounds, 12 shillings and six pence from an ‘initial quilt’. Adjusted for inflation that is around $450 today. Another local Red Cross quilt raised 6 pounds, 12 shillings.

The second reason for the quilt was comforting the troops. Many New Zealand soldiers spent time in hospital overseas, some recovering from wounds and others from sickness. The Red Cross and other organisations put a lot of effort in to sending ‘comforts’ overseas during World War One – especially to people in hospital. Comforts could be things like knitted socks, scarves and vests. They could also be chocolate, tobacco or jam. Some initial quilts were sent to hospitals. The quilt currently on display may be the one mentioned in the Oamaru Mail report on the Weston and Ardgowan Red Cross from 9 May 1918: “In February an initial quilt was forwarded to a New Zealand hospital in France”. The messages of good luck as well as the possibly familiar names were intended to lift the spirits of those in hospital and remind them that people back in New Zealand had not forgotten them.

Unfortunately we don’t know which hospital this quilt was sent to or who found comfort in it as they recovered. We do know that after the war Mr S.J. Clark of Auckland found the quilt in France. He had survived the sinking of the Marquette and he brought the quilt with him to a reunion of Marquette survivors in Christchurch in 1965. Subsequently it was decided to return the quilt to North Otago.