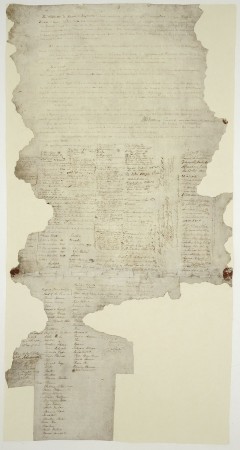 Tomorrow, 6 February, is Waitangi Day. One of the first exhibitions I was involved with at the North Otago Museum was hosting the touring exhibition Treaty 2 U back in 2011.

Despite having studied New Zealand history when I was at high school and taking some Māori Studies papers at university I think it was Treaty 2 U that finally gave me a clearer understanding of the South Island Treaty story.

The Ngāi Tahu website provides an excellent summary of the local story. It begins:

“Ngāi Tahu, our tribe had its first contact with Pākehā (European) sealers and whalers from around 1795. By the 1830s Ngāi Tahu had built up a thriving industry supplying whaling ships with provisions such as pigs, potatoes and wheat. Shore stations were established from 1835 under the authority of local Ngāi Tahu chiefs.

Many Ngāi Tahu women married whalers, and the tribe was no stranger to European ways. When seven high-ranking southern chiefs signed the Treaty of Waitangi in 1840, it was seen as a convenient arrangement between equals. By 1849 when the Crown began defaulting on the terms of a series of ten major land purchases dating from 1844, earlier suspicions of the Crown’s good faith by some of the Ngāi Tahu chiefs were confirmed, and the Ngāi Tahu Claim ‘Te Kerēme’ was born.”

Matiaha Tiramōrehu, of Moeraki, wrote the first formal statement of Ngāi Tahu grievances against the Crown. He wrote “This [is] the commencement of our complaining to you … we shall never cease complaining to the white people who may hereafter come here.”

It took the work of seven generations until the Ngāi Tahu Settlement Act was signed in 1998.

I encourage you to take some time on Waitangi day to explore the links above and find out more about this aspect of our local history. Another great site to explore is The Ngāi Tahu Atlas.

Working with local iwi to care for taonga is one of the highlights of my work as a museum curator. It is also a privilege to share some of the stories of these taonga with our visitors. This year I am going to be learning te reo Maori along with our Curator of Education, Elizabeth King. For me, learning te reo is one way I can support our museum in acknowledging the Treaty and in working in true partnership with local iwi.