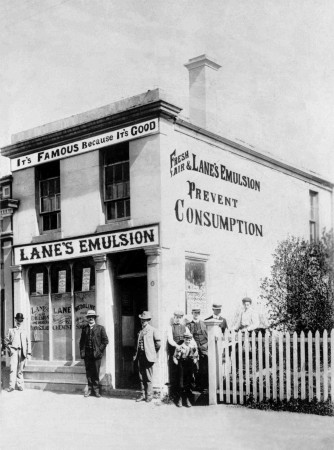 Victorian Heritage Celebrations and the story of Lane's Emulsion

This year the theme of Oamaru’s Victorian Heritage Celebrations is medicine in the Victorian era. So we are sharing the story of Lane’s Emulsion.

Ted Lane had an idea.

He wanted to create ‘the perfect emulsion’. Ted was born in Oamaru in 1868. Like his father, he trained to be a chemist. Back then many chemists had their own health tonic recipes. But Ted’s quest was personal.

An early advertisement stated “like most good things it was the outcome of necessity, being originally prepared by the inventor, a graduate chemist of Oamaru, N.Z., for use by one of the members of his own family.”

The problem was finding the right formula.

Ted worked for years, trying different ideas and pouring a lot down the sink along the way.

Public sales of Lane’s Emulsion began in 1898. At first Ted made the emulsion with his mortar and pestle. Later he used a hand churn and then a factory full of electric powered emulsifying machines to keep up with demand.

Now Ted was pretty smart coming up with his emulsion, but what he really had a flair for was promotion. Adverts appeared on billboards, on sport teams and in newspapers - at first in North Otago, then New Zealand and then the WORLD!

( Well, Australia anyway. In the early 1920s a factory opened in Melbourne. Lane’s Emulsion was also sold in England and around the Pacific Basin.)

Adverts said that “Children like it, ask for it, and take it gladly.” While some loved the taste, most did not. Even Ted’s daughter, Molly, recalled “I didn’t like it!”

Ted died in 1947. Later the business changed hands but the production of Lane’s Emulsion went on. By 1984, times had changed. People were still interested in health supplements but new products had been invented. That year the final bottles of Lane’s Emulsion were produced in Oamaru.

It was the end of an era.

So what is an emulsion?

An emulsion is a mixture of two liquids that won’t usually mix.

For example oil and water. You can shake them up but they just won’t mix together. However … if you add a soap which is an emulsifier you can get them to mix.

Egg yolk was used as an emulsifier in Lane’s Emulsion so the cod liver oil would mix with the other ingredients.

What was in Lane’s emulsion?

Cod Liver Oil
A pale yellow oil made from the livers of cod fish. It has high levels of Vitamin A and Vitamin D. It’s still a popular health supplement.

Beechwood Creasote
An oily liquid with a smoky smell and a distinctive taste. In the past creasote was used as a treatment for tuberculosis (also known then as consumption).

It’s made from the branches of the Beech tree. (By the way, the trees used are those from the Northern Hemisphere, Fagaceae, not New Zealand beeches, Nothofagaceae.) The wood is heated to high temperatures without oxygen. This separates the wood into charcoal and wood tar. The tar is then distilled to get creasote.

Egg Yolk
Egg yolk was included for two reasons. One, egg yolks contain plenty of vitamins and minerals. Two, egg yolk is a natural emulsifier so it helped all the ingredients stay mixed together.

The Lane’s factory used 18,000 eggs in 1907! But what happened to all the egg whites? They were given away. One day a week local ladies could be seen queuing by the factory to collect the whites to take home for their baking.

Hypophosphites of Lime and Soda
These white, odourless salts were thought to strengthen bones and be good for the nervous system. When combined with cod liver oil they were often promoted as a cure for tuberculosis. But they weren’t effective.

Tuberculosis, also called consumption, is a bacterial infection and there was no cure until the development of an antibiotic treatment in the 1940s.

Brandy
You won’t see this on the list of ingredients but it was in there. Brandy was used because it contains alcohol. Alcohol is commonly included in medicines because it is a solvent, dissolving the ingredients, and it is a preservative. And if you were feeling under the weather a little brandy might have lifted your spirits!

The Secret Ingredients
The advertisements for Lane’s Emulsion say there was no secret about the ingredients, but there were some things in Lane’s Emulsion which you won’t read about on the label. We can’t tell you them all, but here are two of them.... cinnamon for flavour and saccharin for sweetness.