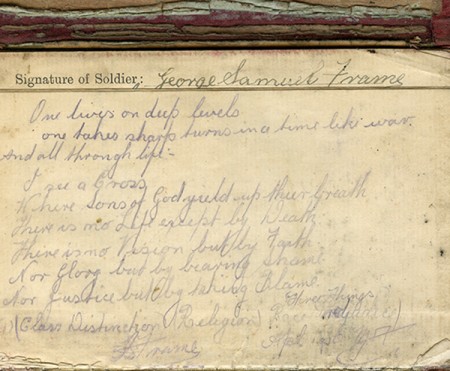 One lives on deep levels
One takes sharp turns in a time like war
And all through life:-
I see a Cross
Where Sons of God yield up their Breath
There is no Life except by Death
There is no Vision but by Faith
Nor Glory but by bearing Shame
Nor Justice but by taking Blame

These lines are from the story The Three Things (1915) by Mary Raymond Shipman Andrews. It is a story about the First World War.

These lines are written in the back of George Samuel Frame’s soldiers pay book. George was working as a railway cleaner before he enlisted in 1915. He was 21 years old. George served in overseas in Egypt and on the Western Front. He was discharged as no longer fit for war service due to pneumonia and trench fever, a disease spread by lice. He returned to New Zealand in 1919.

George Samuel Frame was author Janet Frame’s father. It was an exciting moment when I first spotted these lines and wondered was George a writer too? No, but obviously this story appealed to him enough to write out these lines. Janet Frame drew on some of her father’s war experiences as well as those of other North Otago men when she was writing about World War One in particular and war in general.