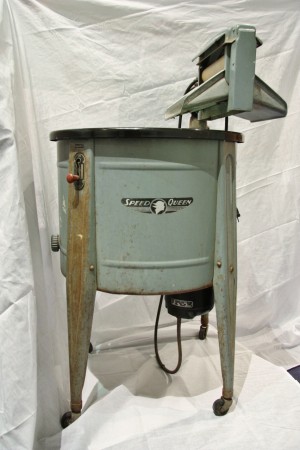 Speed Queen washing machines are made by the American company Barlow and Seelig Manufacturing. In the early twentieth century Barlow and Seelig experimented with hand-powered washing machines to devise a way to increase efficiency through high-speed gearing. In 1911 the company built their first washer powered by an electric motor, and in 1939 Speed Queen washers were fitted with stainless steel tubs, which continues to this day. This model dates from around 1930, after Barlow and Seelig’s White Cloud brand became Speed Queen. Having an electric washing machine made a huge difference to women who would dread ‘Blue Monday’. Speed Queen boasted ‘the most clothes washed clean, per hour, per dollar!’ The machine includes an agitator for automatically moving washing around in the water to clean dirt away. The motorised mangle on top of the machine was used to press excess water out of the washing. A mangle could be dangerous – hair or fingers were easily caught! Barlow and Seelig introduced the first ‘swinging wringer’ mangle in 1915, which could operate in any direction. At the end of the day though, despite the motorised machine and wringer, this machine still had to be filled by hand. Unfortunately we don’t have much information on the history of this particular machine. Do you recognise the Speed Queen brand? Can you tell us any of your stories about using the Speed Queen? Check out this great video