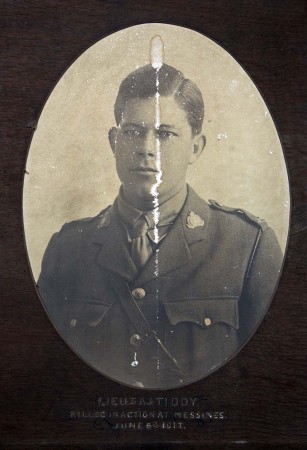 Remembering the Battle of Messines

June 7th this year will be the 100th anniversary of the Battle of Messines. While overall the capture of Messines Ridge was a success, around 700 New Zealanders died during this action. Another 3,700 people were wounded.

One of the North Otago soldiers who lost his life during the Battle of Messines was Alfred James Tiddy. Alfred was born on December 5th 1893. His parents were Annie and Alfred. Tragically his mother died when Alfred was just 2 weeks old. His father worked as a wool carder at the Oamaru Woollen Mills. His father remarried in 1898 when Alfred was 5 years old and subsequently Alfred had 2 half-sisters and a half-brother.

Between the ages of 6 and 14 Alfred attended Oamaru North School. During this time the family lived on Trent Street. At the age 14 Alfred left primary school to go in to work. He worked as a tailor and was employed by J. Rodman at the time he enlisted.

Alfred enlisted in March 1915 and served at Gallipoli. At this time he was 21 years old. He survived Gallipoli and went on to serve on the Western Front. He had enlisted as a private but during the course of his service he was promoted, ultimately to second lieutenant.

Alfred was killed in action on June 7th 1917 and buried in shell hole on the battle field. He was just 23 years old.

A newspaper report following his death noted he enjoyed military life, had been a member of the territorials and had hoped to join the Imperial Army after the war.

His body was retrieved in 1920 and laid to rest at Wulverghem-Lindenhoek Road Military Cemetery.