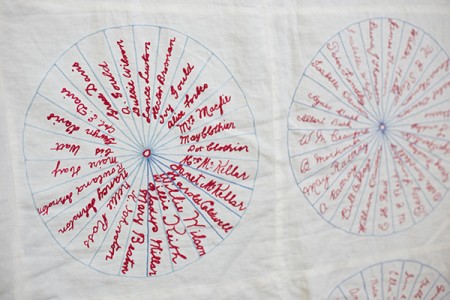 The Hampden-Waianakarua Women’s Patriotic Association embroidered hundreds of names on this signature or autograph quilt. Projects like this were a popular fundraiser around the world during the First World War.

People paid to have their names embroidered on the quilt and then when it was complete it might be auctioned or raffled to raise more money. Usually it cost a shilling to put your name on the quilt. A Timaru quilt similar to this one raised the equivalent of $420 today. The money was then used for patriotic purposes such as sending ‘comforts’ to the troops including socks, tobacco, chocolate and soap. Some quilts were then sent overseas to hospitals caring for wounded soldiers.

The quilt is made from sheets and features 35 ‘wheels’ with the space between each spoke containing a name. The names include servicemen and many other people from the district. Many are still familiar local names today.

Most people used their full name or surname and initials but some only put initials. One person simply put “Wellwisher” and another “Wanaka Weka.” Mrs Murray noted she was aged 96 when she signed the quilt.

A lot of families participated in this quilt. One was the Kemp family. There are signatures from Private Colin Kemp and his brother Private Donald Kemp. Colin was killed in action in Belgium on 7 June 1917 but it is unknown whether he signed this quilt earlier or whether his name was included as a memorial. Their sisters Maggie (Margaret Isabella) and Bessie (Flora Elizabeth) also signed the quilt. So did their brother Hector.

Another family featured on the quilt are the McWilliam’s. Stanley McWilliam and his brother John signed the quilt. Their parents Jane and Archibald, brothers Bruce, Douglas and Fred and their sisters Dora (Dorothea), Alice, Mona, Elsie, Alexis, Jean and Isa (Isabel) also signed the quilt.

If you are interested to know whether any of your family feature on this quilt please email museum@waitaki.govt.nz