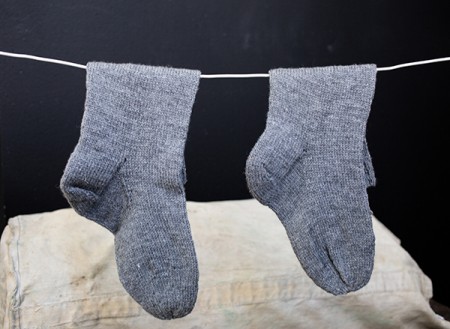 “I washed five pairs of socks that afternoon, and hung them out to dry on the fence by my hut and watched them for a few hours with a jealous eye as some of them were fine knitted ones from Oamaru. I was always very particular in keeping good socks as it made things so much easier for one’s poor feet on the long marches.

Tea-time came on, and I was absent for perhaps fifteen minutes and when I returned my well-washed socks were missing. The only pair I had left was that on my feet and they were done, ‘had seen their day’, and we had a long march ahead of us. My language on this discovery, was hardly drawing-room talk, but I guess was to the point, and I didn’t wish the fellow who pinched them any harm but, I hope his feet blistered until nothing was left except the bones!!”

This quote is from Andy Dewar’s diary. I really enjoyed reading this diary. It contains a lot of detail about life at the front but also personal reflections. Andy wrote, what he called a synopsis of his war diaries, during his return voyage to New Zealand. This gives the diary an interesting quality as Andy offers occasional asides with the benefit of hindsight such as describing a battlefield strewn with dead bodies “One thing we did do, and that was, to step over the Britishers if at all possible. It didn’t matter so much about the Huns. (Later: It did matter! They, the Huns, were like us).”

Our exhibition From little towns in a far land includes a number of quotes from Andy’s diary including the one above about socks. Unfortunately, but unsurprisingly, our museum doesn’t have any original World War One socks. When researching this exhibition I found myself considering what my life, as a woman in her late twenties, would have been like a century ago in Oamaru. It almost certainly would have involved knitting especially socks like those Andy mentions in his diary. So I decided I would knit some replica socks…

I found some second-hand grey wool and an original pattern from Her Excellency’s Knitting Book. On the cover it states “For the Empire and for Freedom, We all must do our bit; The men go forth to battle, The women wait – and knit." The only problem was I had never knitted anything before. Unlike the women of 1915 I had YouTube to guide me - and distract me with the discovery of patriotic knitting songs! - but I must confess after knitting a couple of rows I realized the socks were beyond me. This can’t be a new phenomenon: in the introduction to Her Excellency’s Knitting Book Annette Liverpool notes “to some people knitting will always be a toil and a labour, but to others it is a very soothing pastime.”

Thankfully our wonderful museum volunteer Alison came to my rescue and knitted the splendid pair of socks now on display.