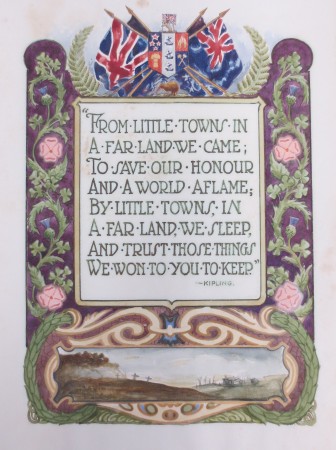 From Little Towns in a Far Land

At the time the memorial was being planned people debated whether it should feature the names of the soldiers who died. Eventually it was decided that a roll of honour listing the names of people from the North Otago district who had served overseas would be placed inside a vault in the memorial.

In the 2000s the vault was opened and the roll of honour was found to have suffered water damage. It was taken to the North Otago Museum for safekeeping. Since then the roll of honour has been professionally conserved. The roll features the same lines as the memorial.

Over one thousand names are recorded on the roll. It includes people who served overseas, not just those who died. It was a challenging job to create a full list of those who had served from the district. Some locals had served with the Australian or British Forces. Others enlisted from other parts of New Zealand. Some names are in pencil, some names appear twice and other names are missing. The names of those who died have been marked with a cross. Many of those named feature in our current exhibition From little towns in a far land. All the names have been transcribed and can be searched at the Waitaki District Archive.

Is anyone from your family recorded in the roll of honour?