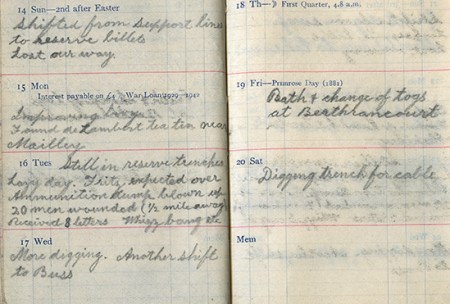 In March 1918 George Grenfell arrived to serve in France. Before the war George worked as a cabinet maker. He had sailed from New Zealand in November 1917. He was 32 years old and had been balloted to serve in June 1917.

His diary entries start on Saturday March 23rd. “Arrived Boulogne, train to Etaples.” In his diary George records his daily life in the trenches. The entries are short and to the point. Aside from his daily activities George has noted some proverbs, jokes and who he has written to at home. The diary also includes maps, helpful definitions, types of military flag, first aid, Morse code, abbreviations, tips on knots and so on.

Sun 19th May. Through front line and a good look into no man’s land through glasses. Did not see any Huns. Had a few shots at Fritz planes.

Fritz was a popular slang name for the German forces. I find the language used in World War One letters and diaries really interesting. It can take a while to understand all the lingo and really make sense of what people were writing about. Trying to make sense of how Kiwi’s spelt French place names is another challenge.

Jerry was another slang term for the Germans.

The war was nearly over. On Armistice Day George wrote:

After the Armistice many New Zealand soldiers had to wait months before returning home. George continued to record his experiences.

He writes of visiting Kew Gardens, Westminster Abbey, Pascall’s Lolly Factory, Giant’s Causeway, London Zoo and other places of interest. George’s last diary entry is from 28 July 1919 when he arrived back in New Zealand: