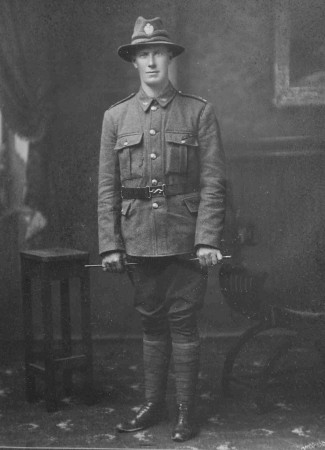 William Duncan Neill received a letter in 1917. At that time he was serving as a Sergeant in the New Zealand Army. He was located at Codford in England. The writer, known only as Nan, tells Willie:

Now Willie about that letter in which I wrote I might “see you home” to New Zealand. Surely you have not harboured the idea that I really meant it. If I had, I would have been a little more modest & kept my wishes to myself. Although I might do worse things than go to New Zealand. However Willie fate has willed things to turn out differently perhaps fortunately for you. I am not saying anything about myself as I dare not express my thoughts on the subject at least it would not be right of me to do so, as I have already pledged myself to someone else you understand Will?

I am sorry if I have led you to believe otherwise but I thought seeing we were old friends that there was no fear of anything existing between us, but sometimes there is no accounting for those sort of things. I will say this much, from the bottom of my Heart, that you are a man whom any girl might be proud of & I do hope that you get a nice girl who deserves a man such as you. Now we’ll let things stand at that Willie & change the subject.

Willie kept this letter along with many other items relating to his time as a soldier. Some of these objects are currently on display in From Little Towns in a Far Land.

In 1925 Willie married Margaret Olive Douglass but he held on this letter from Nan until it was donated to the Waitaki District Archive. Willie passed away in 1986 and is buried with his wife in the Oamaru Cemetery.

Do you have any stories of war time heart break in your family? Do you remember Willie Neill?