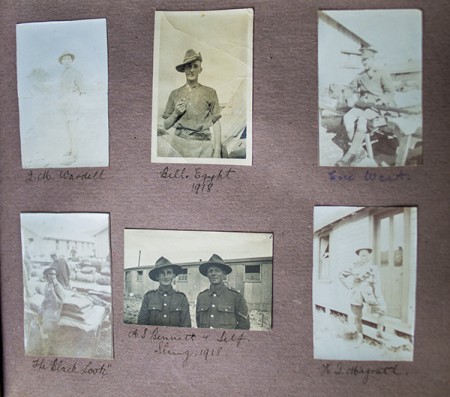 Days spent while being a soldier

The day I first saw this collection item I knew it was something special. I wasn’t expecting it. When I was opening a box looking for a different World War One related item, I found this instead. Frustratingly its record on our computer system was very basic with no information on who it had belonged to.

It is an album containing snapshot photos with handwritten captions. It records someone’s experiences of the First World War and I was determined to find out who it belonged to.

Inside the following is written “Hoping this will remind of the pleasant & other sorts of days spent while being a soldier. Bill”. Who was Bill and who did he give this album to?

Over the years I have become pretty skilled at searching the fantastic Cenotaph database provided by Auckland Museum. I have used it a lot for work but it has also been a tool in a personal quest of mine, to identify my great-nana’s fiancé who died during the war and is known to our family only as Jack (a project that continues in my spare time!) Thankfully I had more luck with this album.

It’s been a while since I identified the soldiers in question but it involved examining the album carefully, identifying the ship they embarked on (the SS Tofua) then identifying what date they embarked and finally a bit of luck looking at the list of names who embarked on that date.

Bill Slater gave this album to his friend George Glen. The album contains many snapshot photos of life in camp, other soldiers, the voyage from New Zealand and visiting different places around the world. It also contains banknotes, a ticket for the London underground and many other souvenirs.

Bill Slater was working as a farmer at Eltham, Taranaki before the war. In 1918 he embarked, aged 23, on the Tofua for overseas service.

George Glen was an accountant working in Invercargill before the war. His family was from Oamaru. He was 41 years old when he embarked on the same ship as Bill. It seems they became good friends through their war years despite the difference in age and backgrounds. This album is a touching insight in to the mateship that developed between these two men. Both men survived the war.