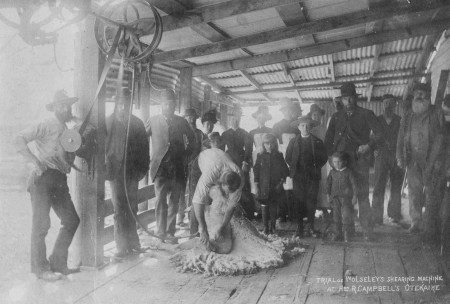 Behind the scenes: Shearing

Behind the scenes at the museum I am still working on researching our collections. This work supports the Cultural Facility Development Project. I am continuing work on the museum’s collection of agricultural equipment at the moment.

One aspect of our agricultural collection is the equipment related to shearing. The first European settlers in Oamaru were sheep farmers. In the 1850s, sheep were farmed for wool. Sheep began to be farmed for meat as well as wool after the development of the frozen meat industry in the 1880s. Even after that development wool remained an important part of the local economy. I have found learning about the history of shearing surprisingly fascinating.

From the 1870s onwards North Otago was the centre of early shearing union action. (See the New Zealand Journal of History, 1990 ,Volume 24, The Struggle for £1 : The Emergence of the Shearers' Union in the 1870s, by John E. Martin, p 56-73.) Aside from newspaper reports there is not a large record of this activity. The Waitaki District Archive holds an illuminated address from the Shearers and Labourers Union presented to local politician George Jones in 1893. It thanks George Jones for “the great services you have rendered to the cause of Labour”. I am hoping to find out more about this aspect of local history.

We have four pairs of blade shears in the collection. Three are single bow and one is double bow. Unfortunately we do not know who used these blades.

In the 1880s one of the first farms in New Zealand to experiment with machine shearing was Robert Campbell's farm at Otekaieke up the Waitaki Valley.

If you have any shearing equipment with a great local connection we would love to hear from you.

I would like to acknowledge Richie Gould for his assistance with cataloguing our shearing collection.