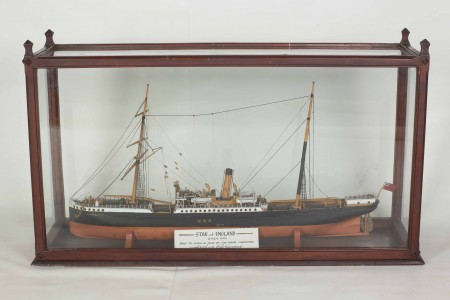 Behind The Scenes at North Otago Museum - S.S. Star of England

Arthur Curwood (1867-1942) made this fantastic model ship back in 1893. It is a scale model of the S.S. Star of England. The ship has been carefully modelled including lots of detail like the lifeboats on the deck, the British naval flag and the captain’s wheel.

Arthur Curwood was a ship’s carpenter on the Star of England. He also arrived in New Zealand by jumping ship from this very vessel. Arthur’s life story is a fascinating insight in to one Oamaruvians’s life in the Victorian era. It can be easy to imagine people didn’t travel much in the Victorian era but despite the challenges of sea voyages many people, like Arthur Curwood, travelled extensively. In a time before immigration restrictions and mandatory passports it was possible jump ship and start a new life on the other side of the world.

Arthur Curwood was born in Bickenhall, Somerset, England on the 10th of July 1867. He went to school between the ages of 5 and starting work at the age of 10. First he worked for a flour mill. He milked cows and travelled around on horse collecting grain for the mill to grind. After 3 years he went to work on larger farm. He later described his work on the larger farm as “slavery” with 12 hours days, 7 days a week.

About the age of 17 he decided he wanted to go to sea. His parents weren’t keen on this though. Instead he started an apprenticeship as a carpenter which lasted until he was 21. He still wanted to go to sea so he found a job as a ship’s carpenter. Initially his voyages were around the Mediterranean and the Black Sea. Next he travelled to India and South America.

On this voyage the captain was absolutely hated by the crew. Arthur decided to jump ship at Bluff. While the ship was in port for a week he went ashore every day and slowly removed all his tools from the ship. On the last night before the boat left Bluff he and his friends went up Bluff Hill and drank a bottle of whiskey. He said his goodbyes to them and then he hid.

A search party came looking for him but he waited until he could see the ship had left port. He then headed in to town. Straight away he bumped in to two police officers who said they were going to put him back on the ship. When he pointed out the ship was already gone they all had a good laugh according to Arthur.

He had married Charlotte Maud Johnson in 1895. They had 12 children together.

In 1911 he was employed as the Oamaru Harbour Board foreman. After a lifetime of journeying Oamaru became his home. He died in Oamaru in 1942.

The museum also has a table he made from timber salvaged from the ‘Star of Tasmania’, a walking stick made of timber from the rudder of the 'Premier’ and some of his carpentry tools.