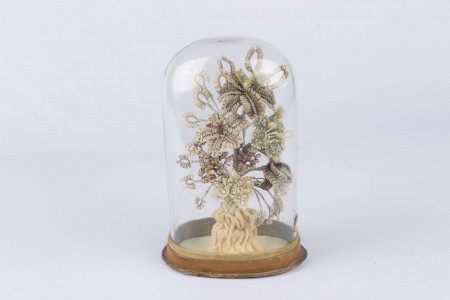 Behind the Scenes At North Otago Museum - Mary Bee's decorations

The museum has two floral table decorations made by a local woman, Mary Bryce Bee (1870-1899). Each contains numerous flowers, all of them are made of human hair. Mary used the hair from a number of people, probably her own family’s. It must have taken her many hours to create each arrangement.

Mary was born in 1870 in Oamaru. Her parents were William and Jemima Bee, both immigrants from Scotland. She had three younger brothers and one younger sister. Mary attended Oamaru Middle School up until the age of 14. It appears after she left school she continued to live with her parents on Wharfe Street.

Mary was 25 years old when she made the first floral decorations in 1895. She made the second decoration the next year. At this time making flowers out of hair was a popular craft. The hair was wrapped around lengths of wire and then bent into shape. Hair was also used to make jewellery, either to remember dead relatives or as a sentimental gift.

In 1898 Mary married Robert Alexander McDowell. Robert was one of the founders of the Oamaru business Darling and McDowell, stock and station agents and grain and seed merchants.

Mary gave birth to their son Horace Bee McDowell on June 10, 1899. Tragically Mary died 13 days later. The registration of her death records the cause of death as a brain embolism. Mary was laid to rest in the Oamaru Cemetery.

While many hair objects were disposed of as fashions changed, these two decorations were retained. It is likely the connection to Mary that ensured her family treasured them. They were presented to the North Otago Pioneer Gallery in the 1950s.