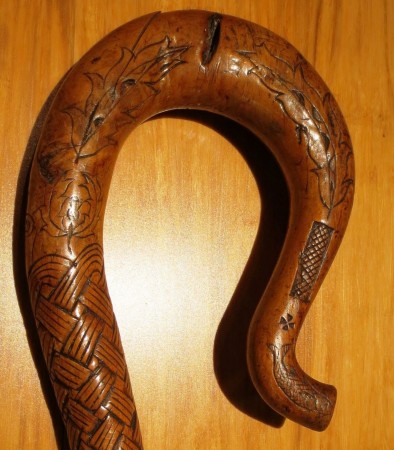 Behind the scenes at North Otago Museum - Carved Shepherd's Crook

One of my great joys in the almost 10 years that I have worked at the museum has been doing collection research. Especially when I have the chance to reconnect items to their story and either confirm, debunk and most often untangle the information noted when the item came in.

Museum record keeping standards 50 or more years ago are not the same as today and as information shifted from hard copy ledgers to databases sometimes errors crept in too.

One of the items that I have done some research on (with help from volunteer museum sleuth Joan Blackburn) is the carved walking stick pictured in this blog. It is one of my favourite objects in the whole museum collection. The carvings are so beautiful and detailed. Make sure you check it out when it goes on display later this year when the museum reopens!

So, were the Cowan’s at Balmoral Castle hanging out with the royal family? The short answer is no. People love to make royal connections to items and usually the story doesn’t add up or can’t be proven (Here’s me back in 2011 with a different collection item with a purported royal connection http://www.stuff.co.nz/timaru-herald/5145298/Truth-about-nightgown-yet-t... )

Janet Bowman’s brother James Bowman (1814-1885) was a game keeper at Ballochbuie, near Balmoral and was known to Queen Victoria. Annie McHardy’s cousin, Charles McHardy (1844-1914) is noted to have “joined the Dunbartonshire Constabulary in 1863, becoming Chief Constable in 1884. He died in office in 1914. Like Peter [his brother], he was a top-rate heavy, and his proudest boast was of beating Donald Dinnie at the caber at Braemar in 1864, when he was 20 and Dinnie 27. For such a big man, Charles had an unusually delicate hobby — he carved walking sticks and fine ivory brooches, using only a pocket knife. So skilled was he that by royal command he carved a walking stick for Queen Victoria, receiving in return a fine oil painting of his father, which had been commissioned for the book, "Highlanders Of Scotland.”

I haven’t been able to trace the walking stick Queen Victoria received to see if the style is the same, but I think it is likely that Charles was the maker of this walking stick. The stick is in the shape of a shepherd’s crook, but it is too small for a shepherd to use. I wonder if it was made by Charles as a gift to Annie when she emigrated to New Zealand.

The items came to the Pioneer Gallery after Miss Cowan’s death in 1962, deposited by her brother Charles Cowan (1879-1966). It is possible he mixed up a few different strands of family history when providing information on the items, it is also possible the Pioneer Gallery recorded them incorrectly.I hope other examples of Charles McHardy’s carving may come to light …… will come to light as other Museums around the world put their collections online as we are doing. That way we might know for sure whether he was the maker of this stick.