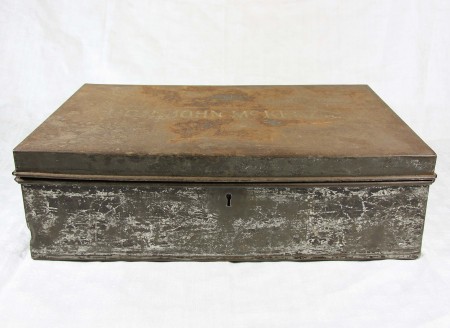 Behind The Scenes At North Otago Museum – Sir John McKenzie

Sir John McKenzie (1839-1901) owned this lockable metal document trunk. It was probably used to hold his documents during his time as Member of Parliament. The document trunk is painted black on the outside and red inside. White letters painted on the lid read “Hon. John McKenzie”. The paint work is very scratched over most of the trunk, likely as a result of travelling with John McKenzie for many years.

When planning the refit of the museum’s permanent exhibition area one important thing is including significant local people. The museum is lucky that it was given this trunk in 2011 as it is a great symbol of John McKenzie’s life as a politician and his contribution to our history.

John McKenzie was born in Scotland. As a child he saw people effected by the highland clearances. Seeing their poverty made a big impression on him and shaped his political views as an adult.

John McKenzie left school at 13 years old and started work as a shepherd. He later ran a leasehold farm of his own. He fathered a child while unmarried but the child’s mother refused to travel with him to New Zealand. In May 1860 he married Ann Munro and then the couple immigrated to Otago. John and Ann had six children together. John and Ann both spoke Gaelic as their first language.

Once he arrived in New Zealand he found work as a shepherd. Later he managed a large farm at Puketapu on behalf of Johnny Jones. John McKenzie saved up his money and soon purchased his own property just north of Palmerston.

He was politically ambitious. His political career started locally. He served many groups including the Palmerston school committee, the Bushey Road Board, the Otago Provincial Council and the Waikouaiti County Council. He was part of establishing the Waihemo County Council and was its first chairperson in 1882. He was elected to parliament for the Moeraki seat in 1881.

Between 1891 and 1900 he was Minister of Lands. During this time McKenzie championed many changes to land policy in New Zealand. Overall he worked to make land available for small family farms rather than large run-holders. Over 7000 people moved on to farms as a result of his reforms. His land reforms also further alienated Māori from their lands. He was also Minister of Agriculture and worked to improve New Zealand agricultural standards during his time in office.

A fine bust of Sir John McKenzie sits in the Waihemo Service Centre at Palmerston. A reminder of the man who served this district and changed the history of New Zealand with his land reforms.