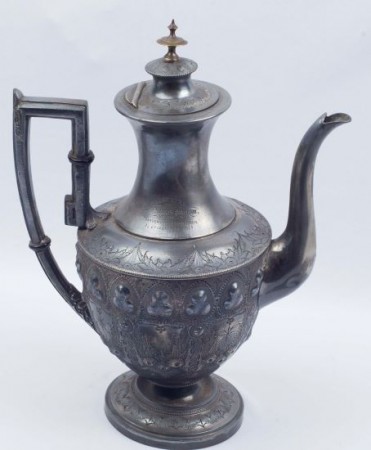 James Paterson and his wives operated the boarding house from the early 1870s until he went bankrupt in 1879. Advertisements viewable on Papers Past show the Paterson's seeking staff to help with their operations at various times. It cost the people living in Albion House the equivalent of $150 a week to live there. In 1877 there were 16 registered boarding and lodging houses in North Otago including the Albion. At the time it was reported in the paper there were 201 boarders residing in these houses. The Albion was the busiest with 34 boarders. In 1879 hard times caused the Paterson’s to attempt to sell. Without a quick sale, James was declared bankrupt in August. His properties were then auctioned off.

The fact that Elizabeth was presented with a coffee pot seems appropriate given her future endeavours in hospitality after the sale of the Albion. In 1879 a local committee determined to open a place other than a hotel “where visitors from the country and others could obtain a good reasonable meal.” At first a temperance hotel was considered but ultimately it was decided to establish a “modest Coffee Rooms.” Local women fundraised to establish this business and Mrs Paterson was employed as the manageress. It was a successful enterprise. Mrs Paterson ceased managing the business in 1898 after almost 20 years of work. Many women, like Elizabeth, worked during the Victorian era whether as part of family businesses like boarding houses or in endeavours like the Coffee Rooms. This coffee pot will be on display in the Empire exhibition space.