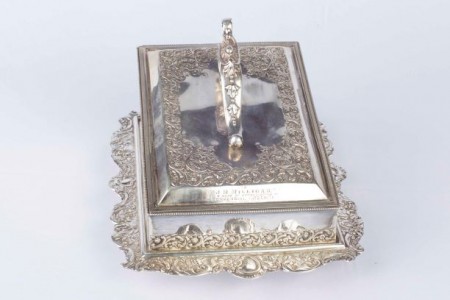 Behind The Scenes At North Otago Museum – J.H. Milligan

This ornate silver-plated cheese keep bears an intriguing inscription. “To J. H. Milligan, As a Mark of Appreciation of Commercial Integrity. 1896." James Houstin Milligan (1841-1930) founded a tailoring business in Oamaru in 1868. During the 1870s Milligan’s business prospered. The business moved from Wansbeck Street to Tees Street and then on to Thames Street before Waitaki House was constructed in 1876 for his business.

Business fortunes in the Victorian era could change rapidly. The late 1870s in to the 1880s were marked by hard times for many businesses across New Zealand. As Te Ara, the Encyclopaedia of New Zealand, notes “In 1879 there were 1,836 bankruptcies, the highest annual number for the next 100 years. On a per capita basis it was more than seven times the bankruptcy rate of any year in the 20th century.” One bankruptcy in a community could set off a chain reaction. If one person could not pay their debts to another business then that put the next company under financial strain and so on.

J.H. Milligan filed for bankruptcy in August 1885. But by November that same year J.H. Milligan was trading again. He had no legal obligation to pay back the debts he had incurred before his bankruptcy but none the less undertook to do so. It took him almost 11 years but in May 1896 the local newspaper published the following letter.

Dunedin, April 28th, 1896. Mr J.H Milligan.—Oamaru. Dear Sir, —We, the undersigned merchants who were creditors in your estate in 1885, when you offered and we accepted a composition on the debts then owing—have very great pleasure in taking this opportunity of expressing our entire satisfaction and pleasure at the way you have honorably made good the deficiency in the above mentioned debts. Such restitution, even when creditors have given a voluntary release, deserves some recognition, and we desire that you accept the piece of plate here with as an earnest of our appreciation of your act, and with the hope that you may long live in prosperity to enjoy the feeling of satisfaction that must be yours. We remain, yours faithfully, Sargood, Son, and Ewen, C. and M. Butterworth (for Butterworth Brothers, New Zealand, Limited), Brown, Ewing and Co, Geo, R. Hercus (for Ross and Glendining), Bing Harris and Co., Houston, Fox and Co.

This cheese keep is the piece of plate mentioned in the letter. It is a record of one man’s integrity and it is also a reminder of the business struggles endured by many in this district in the 19th century.