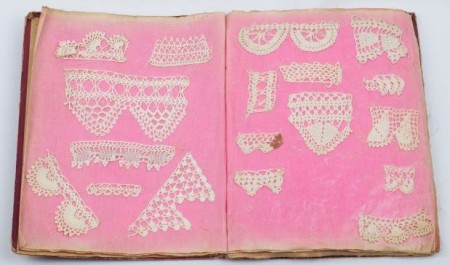 Behind The Scenes At North Otago Museum – Jessie Chalmers

This book of lace samples showcases the work of Jessie Tait Chalmers (1872-1937). The book contains many pages of samples of different laces, all made by hand by Jessie. It represents many hours of work. The samples have been carefully stitched on to each page. The book is inscribed in pencil “Jessie T Chalmers, Roseneath, Weston, October 9th 1895”. Jessie would have been 23 years old then. Books like these were made by many women during the Victorian era. Demonstrating a talent for such work could be useful when seeking employment as a domestic servant.

The types of lace shown would have found plenty of applications in the Victorian household. Lace was worn on collars and cuffs and used to trim undergarments and nightwear. It was also found on dollies, tablecloths, pillowcases and more. This type of lace is known as tatting. Tatting uses knot and loops to form a durable lace suitable for these uses.

It is often hard to recover a detailed picture of women’s life in the 19th century. The details we can find of Jessie’s life from historical records only give a broad impression of her life.

Jessie was born Janet Tait Chalmers on the 15th of February in 1872 to Janet and David Chalmers, both Scottish immigrants. David was a blacksmith. At the time of Jessie’s birth the family were living at Tokomairiro. Jessie was second youngest of their six children. In the 1880s they moved to Weston.

Electoral rolls show that Jessie worked as a cook at Fairlie as a young woman. She married Robert Allan of Maheno on the 26 December 1905. She was 33 years old. They had two children together, Gavin and Janet Isabella. Jessie died in 1937 and is buried in Oamaru Cemetery. One of Jessie’s granddaughters donated the lace book to the museum in 2010. At the time she recalled that Jessie was always very good at fine knitting.