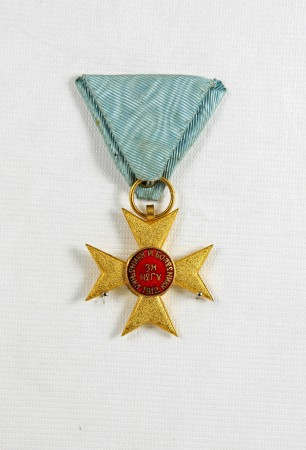 Some local military stories are well known. Others have come to light only recently. The following biography of local World War One nurse Maria (Ria) Emily Murray (1891 – 1976) took me 7 years of research on and off to uncover.

Ria was awarded the Serbian Cross of Mercy medal for her service. This medal is included in the exhibition ‘The Women's War Patriotism, Service & Dissent’ at Toitū Otago Settlers Museum.

One of the first collection projects I worked on when I started at the museum in 2010 was researching the North Otago Museum’s medal collection. I was aware that the centennial commemorations of the World War One were on the horizon and I wanted to get a sense of what we held. One of the medals I came across was a Serbian Cross of Mercy 1912. At this stage there was no record of who this medal had been awarded to so I moved on.

It was years later that I came across a letter in an old museum file. This letter from 1975 lists items that were donated to the museum by a Miss Murray and notes “I understand that the embroidery is from Serbia where Miss Murray was a nurse many years ago.”

I took a closer look at what she had donated. Aside from the medal the only obviously Serbian item was a coin. The collection of items listed as being donated by Miss Murray was intriguing. There was crystal from Ireland, a World War Two silk map of France and beautiful Chinese textiles. It seemed Miss Murray had traveled and been involved in World War I and World War II. Looking at these items I imagined a woman travelling from global hot spot to hot spot during two world wars and nursing the sick and the wounded. The reality was a different story!

I started with the Births, Deaths, and Marriages website and found Maria Emily Murray, born in New Zealand in 1891, died in New Zealand in 1976. She never married. The Kurow Museum pointed me in the direction of a photo of Mr and Mrs John Robert Murray and family. I looked on our cemetery database and could see she was buried in the Oamaru cemetery in the same plot as her parents and her sister. She had attended Kurow School and later Waitaki Girls. I checked the electoral rolls. Maria only appeared in 1928 and then again from 1957 onwards. Her occupation is listed as spinster and her address is the family home, along with her mother and sister. Which begged the question, where was she living the rest of her life?

Shipping records confirmed she left NZ aboard the Tainui from Dunedin in 1913. She was 21 years old. That voyage ran into trouble as the Tainui collided with the Inca and the passengers had to be evacuated. What prompted her to leave New Zealand? In December 1912, her brother John David William was born so perhaps it was too crowded at home with a new baby. I have also wondered at the possibility that the baby might have been her son rather than her brother and perhaps that is why she left? He later died in combat during World War Two.

She seems to have been in Ireland when the war started. Ria ended up nursing as a Voluntary Aid Detachment nurse. This means she was not formally trained or qualified in nursing. Papers Past revealed letters that Ria had sent home that were then published in local papers. For a brief period of time she was a prisoner of war, falling into the hands of Austrian troops after six months working as an orderly in a Red Cross hospital in Serbia in 1915. Ria wrote home to her mother “It was a ripping journey from beginning to end, everybody, even the Austrians, being so awfully good to us.”

Records from the British Red Cross confirmed her volunteer nursing in Serbia and later in England. In 1918 she is recorded as nursing at Rugeley Camp, Cannock Chase in Staffordshire, England.

I ordered Ria’s probate from Archives NZ in the hope of finding some more information about her life but unusually the names of the people she left money to mostly led nowhere. I kept chiselling away. Luckily for me Ria had a prominent nephew. Reginald John Bailey, known as Chip, was a prominent trade unionist and communist during the mid-century so I was able to find out about him online and after more googling and sketching out family trees I eventually located Ria’s great-niece.

She kindly helped me fill in some more details on Ria’s life. During World War One she became friends with Lyon Blease and his future wife, Harriott Davies. During World War Two she was employed as a civil servant working in censorship. While living in the UK she lived in the households of Professor Lyon Blease in Liverpool and her Aunt Barbara at The Great House, Edington, Bridgewater, Somerset. She cared for the children of her friends and relatives. She returned to New Zealand in the 1950s to care for her mother.

So my initial vision wasn’t quite right. For now, despite all this research, how Ria came to have a fabulous collection of Chinese textiles remains a mystery. I can find no evidence of her travelling to China. Her great-niece’s suggestion is that she was given the items as gifts in thanks for all the child care she carried out for friends and relatives in the UK.

As for the silk map from WWII, I went back to our hard copy records and it actually came from a different donor, Rona Murray, and it had been entered on the computer incorrectly.

It has been very rewarding to be able to finally reunite this medal with its story and to recognise another local person’s service during World War One.