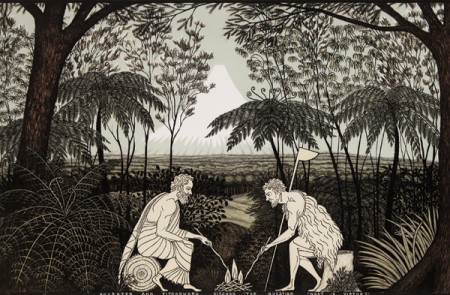 The protagonist of Marian Maguire’s new print series is an impressive figure of nineteenth-century Taranaki. Titokowaru was a trained Maori tohunga but a Christian convert; an advocate of peace but an outstanding military strategist; a powerful and charismatic leader but one who lost the support of his followers. This complexity makes him an absorbing subject for Maguire, whose prints challenge simplistic readings of colonial history.

Maguire develops distinctive imagery drawn from ancient and colonial sources, combining the bold silhouettes of Greek vase paintings with the tonal gradations of colonial paintings and photographs. The colour lithographs of Titokowaru’s Dilemma create fascinating cultural crossovers, where Titokowaru debates questions about virtue and peace with Socrates and Te Whiti, Gustavus von Tempsky dies on the battlefields of Troy, and Venus de Milo is taken captive in a Maori pa. Equally intriguing are Maguire’s etchings of surprising visitors to local landscapes in A Taranaki Dialogue, and of amorous adventures involving Greek gods, Maori maidens, satyrs and settlers in Colonial Encounters.

Image: Socrates and Titokowaru discuss the question, 'What is Virtue?', Marion Maguire (2009/2010)