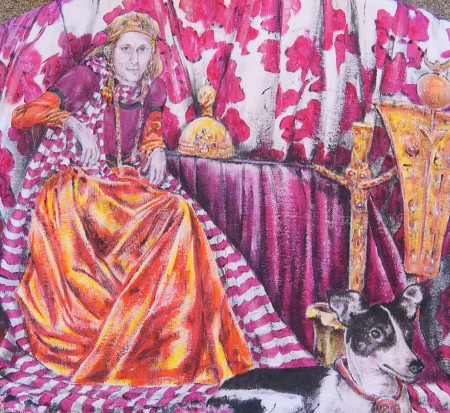 Out of Kilter, Dyan Prujean

“I like the idea of people being literally wrapped up in my artwork and wandering about in it. A sort of walking exhibition that changes with the wearer and the walk.”

Wearable art was made popular in New Zealand with the World of Wearable art competition, started by Dame Suzie Moncrieff in 1987. Dyan has been making and taking part in Wearable Arts shows since the 1980s. She first hand painted coats when she lived in Palmerston North. In 1999 she moved to Dunedin with her 3 year old daughter where she attended Dunedin School of Art. Then to Oāmaru in 2008 where she exhibited in the Grainstore gallery and Tigerlily’s.

The wearable art movement started in the sixties: fuelled by social and political upheaval, personal expression and exploration. It was also a salute to the 19th century dress reform movement which had a focus on clothing for health and comfort, rather than appearances. Dress reformists were inspired by classical Greek and renaissance clothing. It was out with corsets, bustles and exaggerated silhouettes, and in with Japanese kimonos and the decorative arts.

This body of work was mostly accomplished during and after the Covid 19 lockdown. It references Dyan’s Scottish heritage, her social phobia (social distancing is second nature to her not just because of Covid 19), and her dreams which she recorded during lockdown. The coats are made from found and recycled material including damask tablecloths. The tartan is either new or from kilts and scarves.