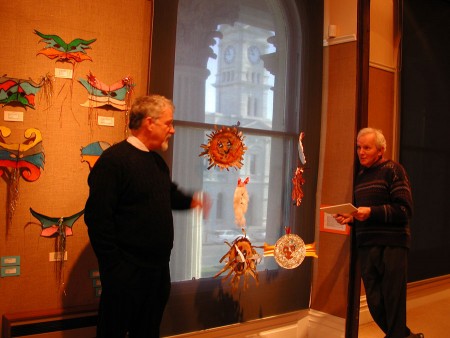 My involvement with Oamaru school art exhibitions predates Burns’ Memorial.  As a pupil at Waitaki Boys in the early sixties my art teacher, the late Colin Wheeler, encouraged me over several years to submit a number of paintings to the Christchurch Star Sun South Island Secondary Schools' Art Exhibition. At that time The Star Sun was a popular art exhibition of school art that toured to South Island venues – there was a North Island counterpart in the Auckland Star School Art Exhibition. Both exhibitions were sponsored by the Christchurch and Auckland Evening Star newspapers and in the mid decades of last century were toured by, and in association with, the Arts and Crafts branch of the then Department of Education.  As a schoolboy I have fond memories of helping a Miss Joan Duffy who in those distant days was a school arts advisor, and who if I recall correctly, was based in Oamaru. With her I helped hang the Star Sun exhibitions in the upstairs room above the Oamaru Library, now the North Otago Museum.

Little did I realise then that these first displays were precursor to the many exhibitions I would install at the Forrester!

The late George Burns was also an Oamaru Boy!!  A highlight of a distinguished journalistic career was as editor of the former Christchurch Evening Star Sun newspaper. In that position he played an important role in the promotion of South Island school art.

If I recall correctly, and in 1970, as WBHS Art Master and North Otago Art Society committee member, George Burns was invited by the Society to open their annual exhibition in about 1969.  Although I was not present at the opening, Mr. Burns in his address recalled his Oamaru days, his association, support and interest in school art and in his position as editor sponsorship of the Christchurch Star touring art exhibition.  I believe in his address of 1969 he lamented that the Star Sun exhibition had ceased to exist!

In opening the Society exhibition of that year he suggested that the North Otago Art Society might continue for the Waitaki community the tradition of the Christchurch Star Sun Schools Art Exhibition.

Fifty years ago the Society accepted that challenge and today the rest is history! The exhibition is indeed a lasting legacy and memorial to the late George Burns CMG who sadly passed away in 1970.

As a member of the Art Society and local art teacher I was fully involved in the promotion, installation, and running of the Burns Memorial in those early years above the former Oamaru Library.  From 1983 the Forrester Gallery was the venue for the annual and exceedingly popular Burns Memorial and indeed through to the early 1990s the North Otago Art Society played a prominent part in promoting exhibitions, working with schools, and assisting in the arduous task of installation and inviting a guest speaker and hosting exhibition openings2.  The Society even provided afternoon tea for the children, teachers and parents!

Unfortunately the North Otago Art Society, due to at that time an aging membership, ceased to be actively involved with the Burns although the Society continued to stage their annual exhibition at the Forrester every second year.

By then the secondary and primary scope of the exhibitions had been widened to include children from the early education sector.  About that time, due to limited available display space and the challenge of displaying work at ‘child friendly height’, the number of works were restricted from each school or early education centre.

In ensuing years gallery staff continued to maintain, administer and host the annual Burns each year. Staff were always most appreciative of the support of local art specialist teachers and wider school communities in the installation (no small task!) and promotion of the exhibition.

That support included the design and production of a Burns Memorial gallery banner3 and help with poster design and distribution.  These close gallery/school links culminated in regular supplementary school exhibitions in the gallery stairwell and community gallery.  I am delighted that the Forrester is one of the few public institutions 4 that has hosted a tradition of school exhibitions for nearly half a century and that the Gallery schools’ outreach is in such good heart and continues to grow year by year!

The vision and legacy of George Burns has made this a reality.  That vision and the Burns first attracted the late Noel Parsloe to the Forrester and the Burns exhibition of I think 2006, a visit and association that culminated in the gift of the Parsloe Family Trust Colin McCahon collection. 5

After my involvement of more than forty-three years with the Burns Memorial my one regret is that limited space precluded our retaining selected works from each exhibition.  My wish is that the gallery might stage a Burns retrospective at some future date!

Wouldn’t it wonderful if there could be a Burns Retrospective – perhaps in 2070!

1. George Burns was a former pupil of Oamaru North. If I recall correctly his brother Jim Burns was a building inspector with the Oamaru Borough Council.
2. Burns family members were invited to at least one Burns opening.
3. The banner was produced by the children of Weston School. Their teacher was David Atkinson.
4. The Aigantighe Gallery in my time at the Forrester staged the annual Artarama Schools Art Exhibition.
5. Noel was a teacher. He was a regular visitor to the Burns and enjoyed meeting and talking to the children about McCahon who was his brother in-law. 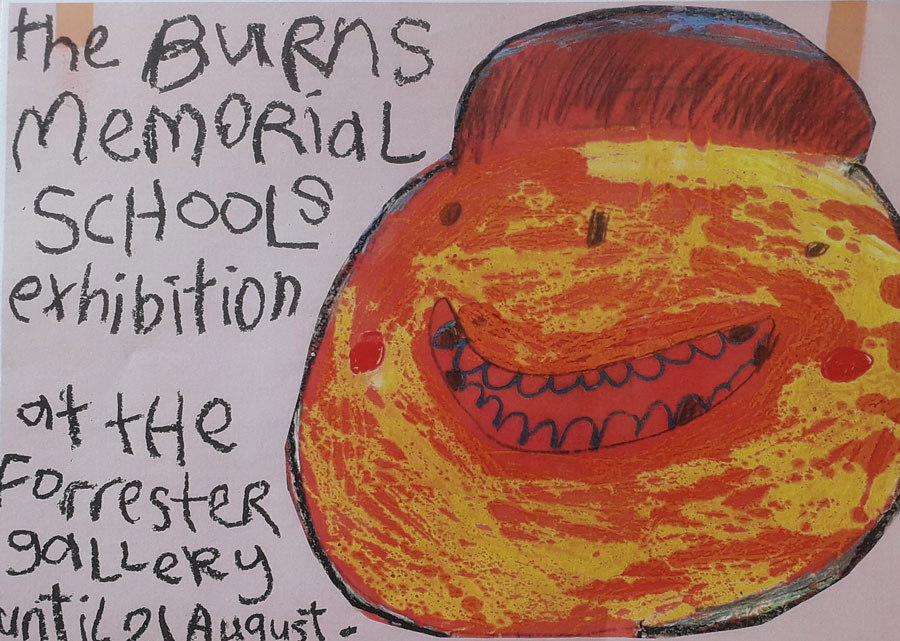 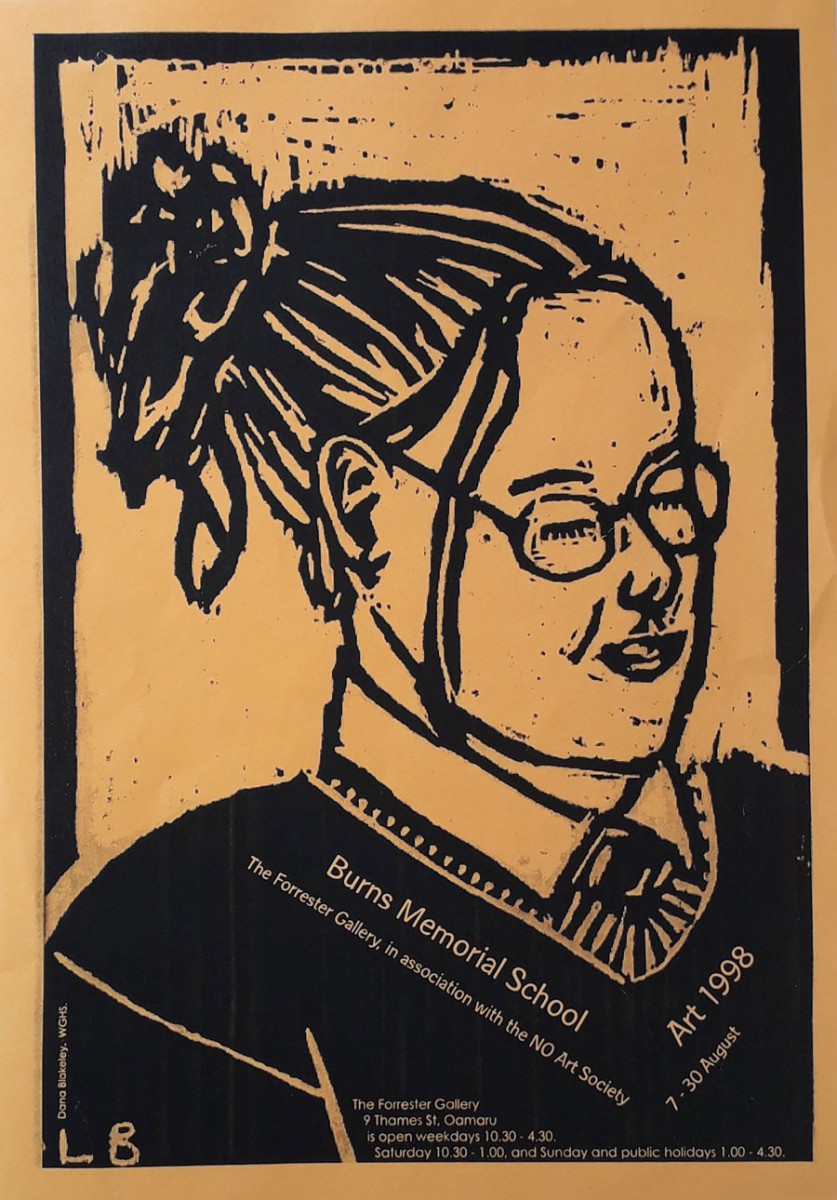 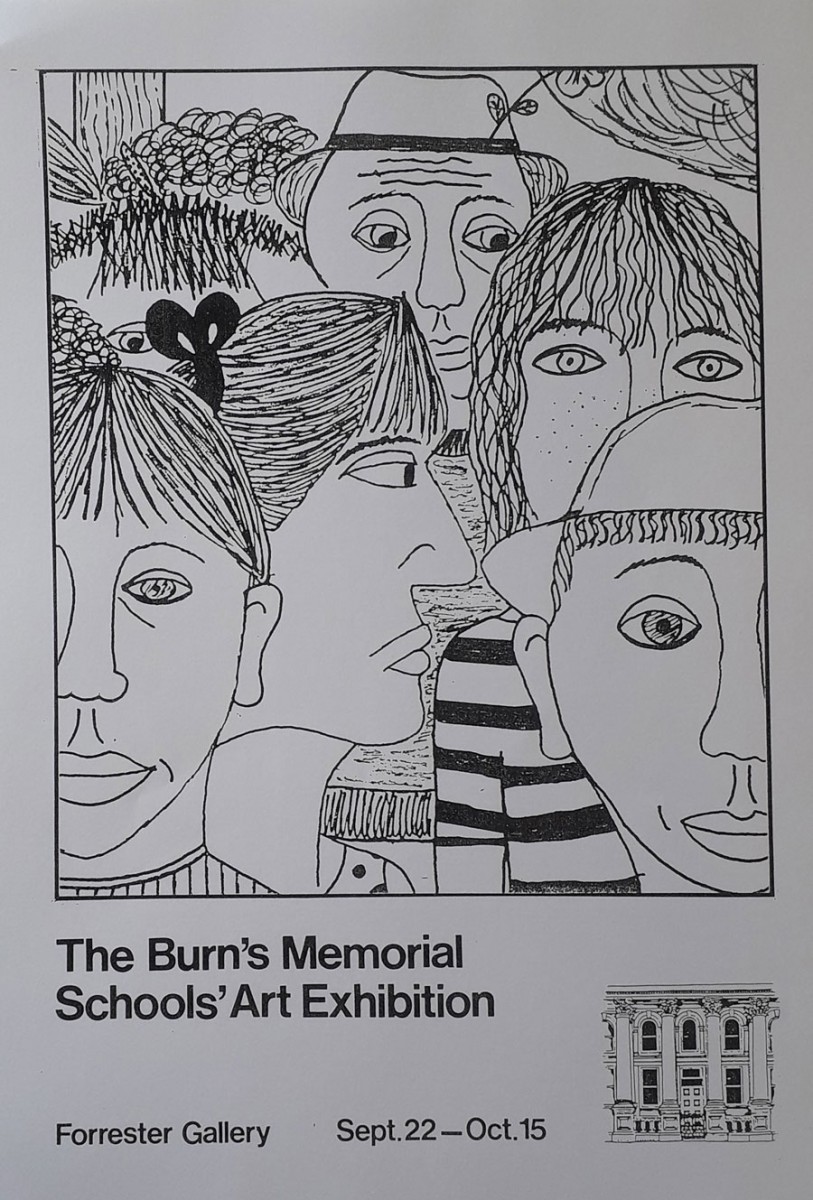 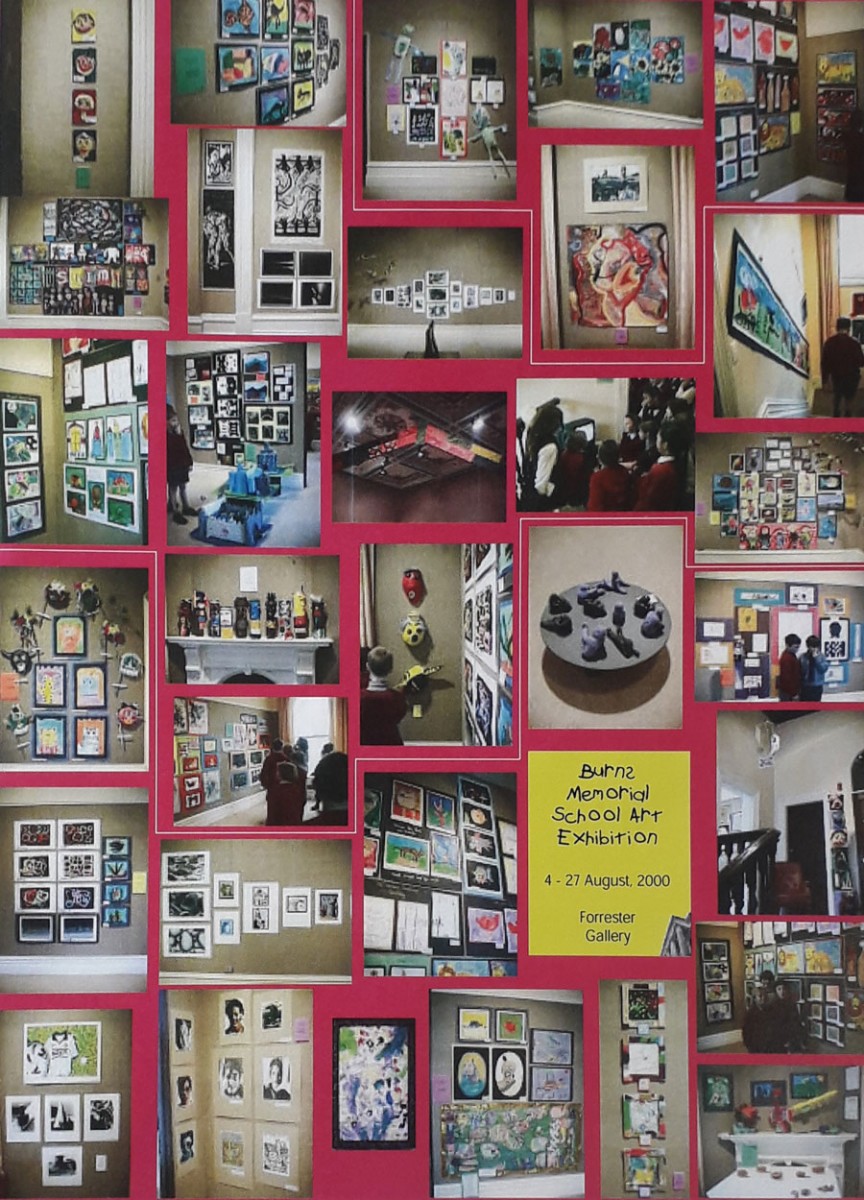 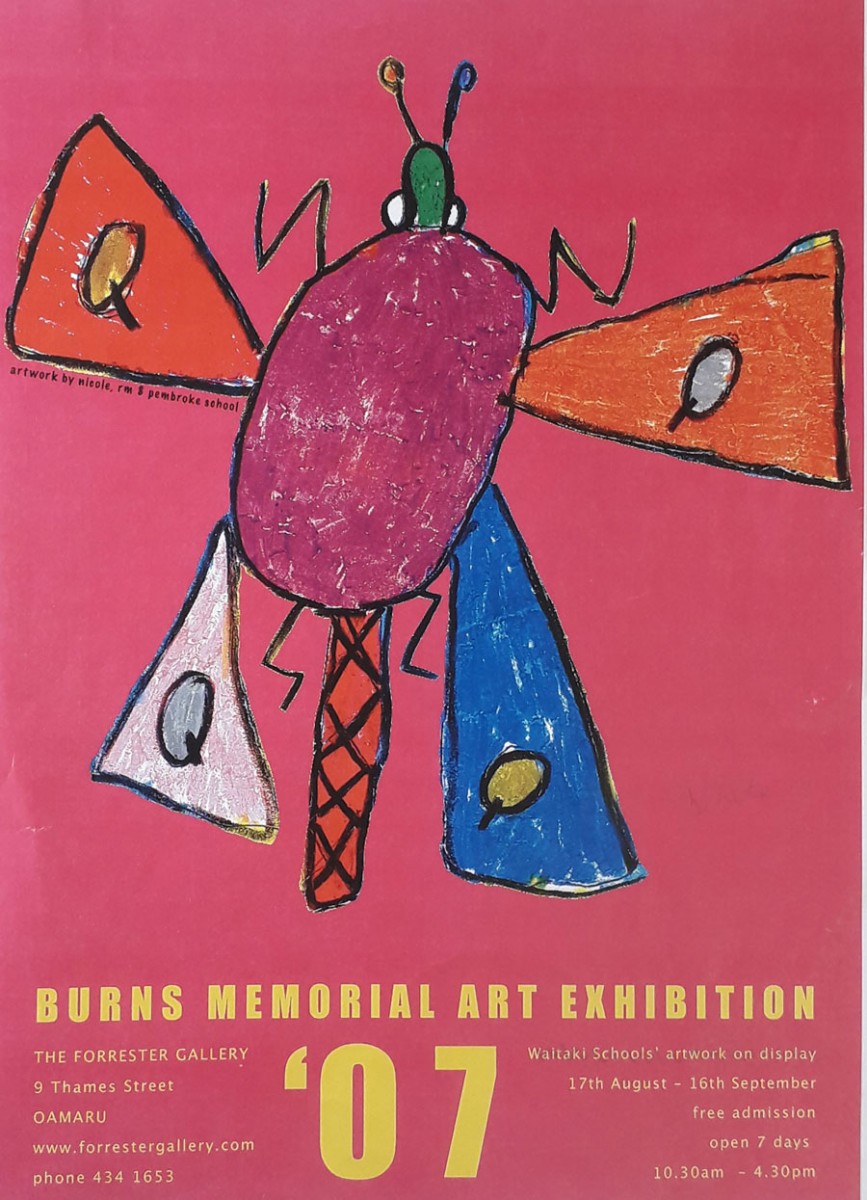 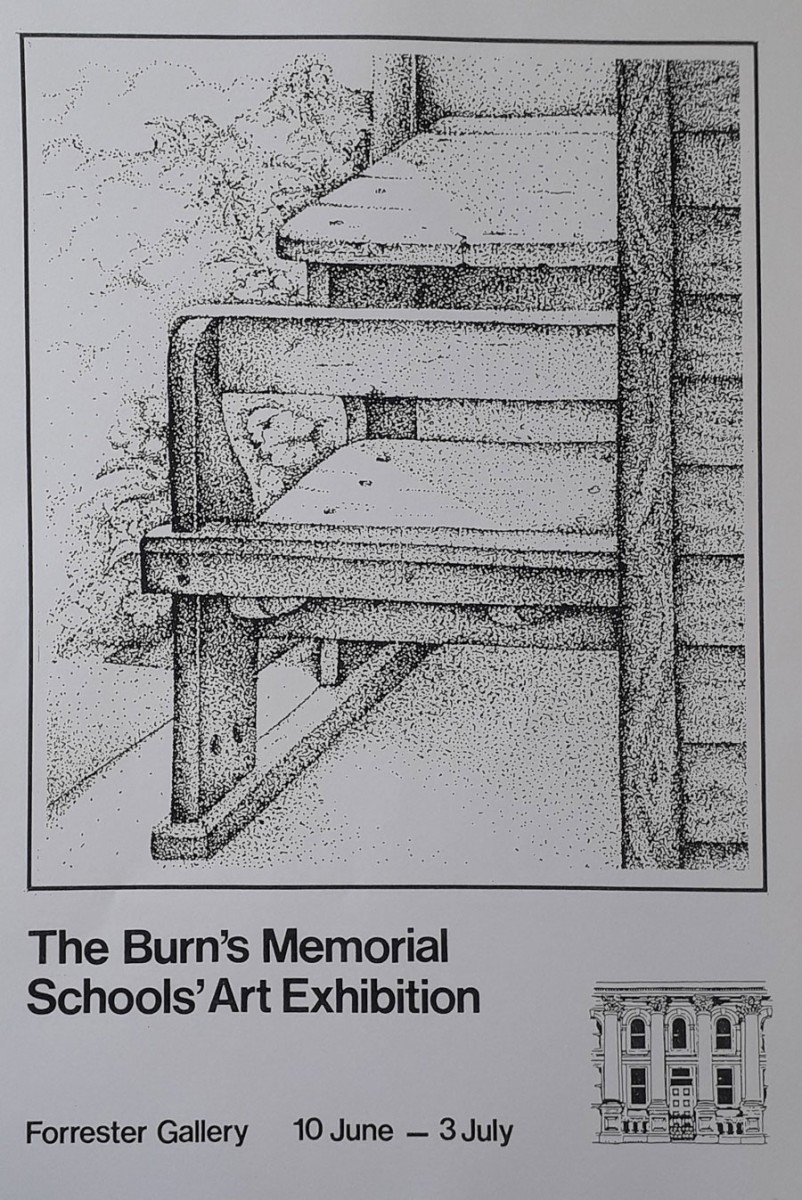 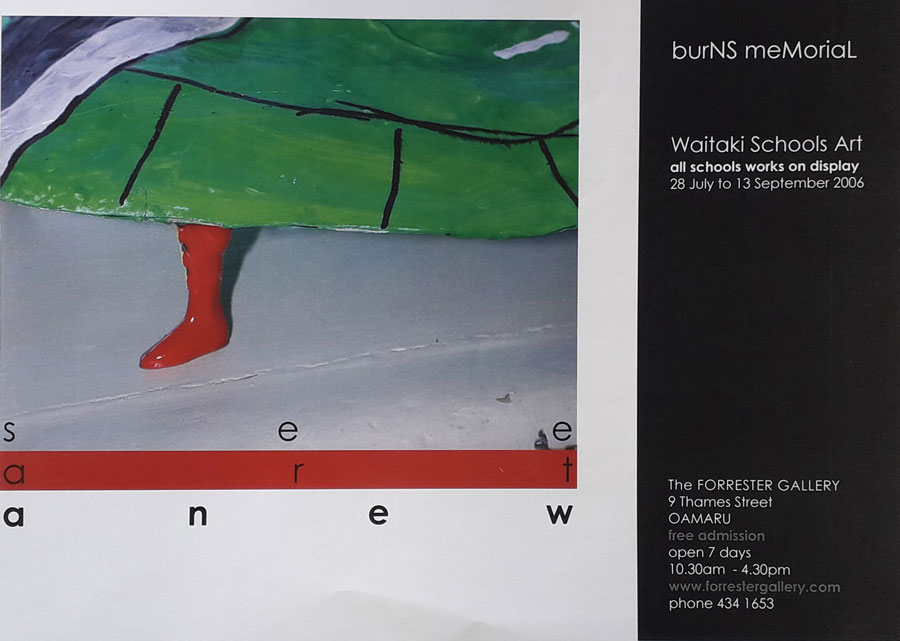